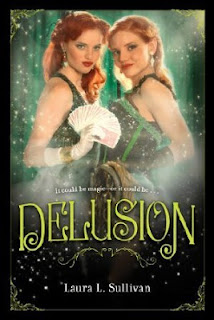 Goodreads Summary
When two beautiful teenage stage magicians in World War II England meet a pair of handsome men who can do real magic, sparks fly. But is it illusion, or delusion? Opening-night jitters are nothing new for Phil and Fee Albion, who come from a long line of stage illusionists. The girls love to dazzle London audiences, but in the aftermath of the Blitz they're bundled off to the countryside, where they're safe from bombs and Nazis--and bored to pieces. Phil, always the passionate one, discovers a hidden college of real magicians led by the devastatingly handsome Arden. If only Phil can persuade these unworldly magicians to help England win the war! Daredevil that she is, she'll risk anything to give her country a fighting chance, even if it means losing her heart . . . or her life.

Welcome to the House of Delusion

"If danger and evil were hideous, everyone could avoid them. The wickedest things are cloaked in beauty."

I love reading about red-heads. These are usually the best heroines that I have come across. When I read the blurb for this book, I was thrilled because I love magic and it seemed right up my alley.

I was enchanted by Phil and Fee who are incredibly different personalities. Phil is the tough, brave, significantly stubborn red-head that I am used to reading about. Fee is loving, soft, and has a more innocent view of things. They are illusionists and very knowledgeable and dedicated to their craft.

I enjoyed meeting the magicians that stay in the College at Stour because they were almost the opposite of Phil and Fee. They don't use spells, they pull on the Essence given from the Earth itself. The magic in this book is unique.

The content about the war was very well-done. There are a lot of facts and it feels real. I believe Sullivan really knew what she was talking about here.

I actually wanted to read more about Fee because at times Phil became annoying to me. She was the 'squeaky wheel', and while it's commendable to never give up on what you believe in, I felt she was a little overdone with how much she pushed people to involve themselves in the war effort.

Also, there are a lot of back-and-forths during the narrative between character's points-of-view. It was dizzying to me and hard to keep track of at times. It was easy to put this book down and read another one, and I had to keep picking this one up to get through it.

Even though I realize that it had to be done for the sake of continuing the story in an interesting fashion, I was against magic being pushed on one of the characters. It was a violating moment with disastrous consequences, and I feel we could have read the same outcome with a different way of getting there.

I like when characters are pushing each other away in the beginning, but end up in love later on. Phil has this type of relationship. However, nothing is roses and they have the type of second book heartache already happening in this one. Conflict after conflict that keeps their relationship from fully developing. Fee had the insta-love as Phil described her as falling in love ever 10 minutes, and I actually liked it in this case.

I'm glad that I read it as the characters were great. I was a little bored with all the war talk and wanted a little more magic, but personally I am not a history buff and it tends to make me yawn. I would not recommend anyone below late teens read this story. If you like to read books with real life events happening and a little fantasy thrown in, you should give it a shot.

"'There's no war here,' Mrs. Pippin said at length. 'The war is for them out there. Folks who stay in Bittersweet never have to worry about such blights as wars. Bittersweet's safe.'"

"You can hide fear, like Uncle Walter did for a while, but you can't help it. Pray God you never have to find out."

"'She was as anonymous and uninteresting as the an animal, as common as the starlings that settled in a dark murmuration in the meadow behind her."

"In fear, and not with thoughtful purpose, you used forbidden magic. You sought to kill a human."

"'It isn't a question of race,' he said. 'It's a question of ability. I am more powerful than you by virtue of my ability to control the Essence. Therefore, I'm superior. It's only logical, but I don't need to dominate you.' 'I'd like to see you try,' Phil said under her breath, but Arden had looked away again."
Posted by JezzebellJC at 1:48 PM