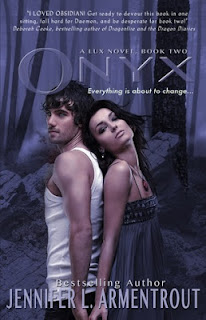 *Please note that it is very hard to review books past the first one in the series without having any spoilers at all. I will try to keep it as spoiler free as I can, but if you haven't read the first book in this series, you may just want to read that review instead of continuing with this one. Also, I would like to say that generally the 2nd book in a series is my least favorite.

Thanks to his alien mojo, Daemon’s determined to prove what he feels for me is more than a product of our bizarro connection. So I’ve sworn him off, even though he’s running more hot than cold these days. But we’ve got bigger problems.

Something worse than the Arum has come to town…

The Department of Defense are here. If they ever find out what Daemon can do and that we're linked, I’m a goner. So is he. And there's this new boy in school who’s got a secret of his own. He knows what’s happened to me and he can help, but to do so, I have to lie to Daemon and stay away from him. Like that's possible. Against all common sense, I'm falling for Daemon. Hard.

But then everything changes…

I’ve seen someone who shouldn’t be alive. And I have to tell Daemon, even though I know he’s never going to stop searching until he gets the truth. What happened to his brother? Who betrayed him? And what does the DOD want from them—from me?

No one is who they seem. And not everyone will survive the lies...

Full of Alien Mojo, "B" Names, and Pen Pokes

I loved the first one in this series so much, that I immediately purchased this one and devoured it.

At the end of Obsidian, Daemon tells Katy that he is up to the challenge of proving that they can have a love like her parent's. When Onyx starts, Daemon begins his wooing of Kat. While she is fighting to keep him at arm's length, a new guy has entered the scene and starts courting Katy as well. There are a lot of new surprises, secrets, and slip-ups.

I'm going to start with the bad this time, because there is simply too much good to get through. Katy in this book was being one of those girls that I wanted to shake at times to make her see some sense. She admitted that she was constantly making mistakes and was a "failboat" so eventually she started making some sane decisions, but I confess that I was shaking my head at her often in the beginning. Also, Dee didn't come across as near wonderful as she was in the first one for me and most of that had to do with the fact that she really didn't have much page time.

It begins with a thrilling series of Daemon attempting to woo his Kitten. He is not as much of a "douche-canoe" as he is in Obsidian, although with the introduction of a new character, I enjoyed watching the jealous Daemon come out to play. I laughed out loud so many times during this story. What was the new guy's name? Bart, Biff, Bilbo Baggins...I guess Daemon will never really know. So even though he laid off being such a jerk to Kat, he still had plenty of snark to throw around and managed to get her riled up very often. Some of the lines that he let go of in the journey to court her were simply hilarious.

Katy had quite a character transformation as well. I told you above that she aggravated me with some of the choices she made, but she also showed a lot of loyalty, bravery, and just plain gumption. She was placed in some situations that had me asking myself what I would do in her place and she impressed me quite a bit. I still got some nice blogging scenes and watched her swoon over book boyfriends which is something I love about her.

"I think reading is sexy." Daemon smiled at himself. My brows inched up my forehead. "Do you now?" "Oh yes, and you know what else I think is sexy?" He leaned forward so his entire face filled the picture and nodded his head toward me. "Bloggers like this. Hot."

The story is progressing at the just-right pace. I think there is so much mystery and so much on the line for everyone involved that any of these characters could be out to get Kat, and the suspicion has me on my toes wanting to know every dirty detail about each one of these characters.

Daemon knows that Kat has feelings for him and he likes her as well. The problem is that Kat cannot believe that he would feel anything if it weren't for the connection or the challenge she presents to him so she keeps him at arms length and tries to deny any sort of romantic feelings. The chase is on, and it was spectacular to read!

"Come and get it." Come and get...? Daemon placed half the cookie between those full, totally kissable lips. Oh, holy alien babies everywhere...

There are plenty of obstacles to get through, lots of secrets and suspicions, and a great deal of laugh-out-loud dialogue mixed with super hot chemistry. I would absolutely recommend this book.

"It wasn't real. I wanted what my parents had. Undying love. Powerful. True. A whacked-out alien bond couldn't do that for me."

"Dog-eared pages were the Antichrist of book lovers everywhere."

"Daemon frowned. 'I know it seems like a huge surprise to you that I do have feelings and therefore do feel bad at times for things that I may have...caused.'"

"'Do you know what I've been thinking about all day?' With him, it was anyone's guess. 'No.' His lips brushed the skin of my cheek. 'Finding out if you look as good in striped socks as you do in reindeer ones.' 'I do.'"

"We could trade insults all day. But this Daemon...this one who wouldn't give up was kind and gentle, funny and - dear God - thoughtful."

Posted by JezzebellJC at 7:15 PM