Review: The Iron King (The Iron Fey #1) by Julie Kagawa 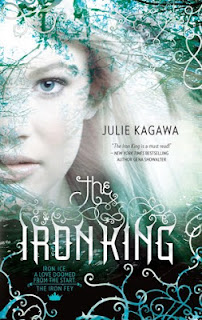 Goodreads Summary
Meghan Chase has never fit in at her small-town high school, and now, on the eve of her 16th birthday, she discovers why. When her half brother is kidnapped, Meghan is drawn into a fantastical world she never imagined--the world of Faery, where anything you see may try to eat you, and Meghan is the daughter of the summer faery king. Now she will journey into the depths of Faery to face an unknown enemy . . . and beg the help of a winter prince who might as soon kill her as let her touch his icy heart. The Iron King is the first book in the Iron Fey series.

This one caught my eye due to the beautiful cover and I realized that I was late to the party having not read this series yet.

Meghan Chase is a girl reaching her sixteenth birthday living in the country with her mother, stepfather, and little brother Ethan. When Ethan is kidnapped, her best friend Robbie shows her the way into Faery even though it is strictly forbidden for him to do so. She meets the enigmatic Winter Prince Ash and with a bound promise from him and the help of Robbie who turns out to be Puck from A Midsummer Night's Dream, she clumsily makes her way to The Iron King in order to save her brother.

The imagery in this book is simply stunning. When you are supposed to have goosebumps and be chilled to the bone, you most certainly are. When you are meant to feel wonder and imaginative, you do. When you are introduced to the character that takes Meghan's breath away with his beauty and coldness, yours is taken as well. The characters are charming and easy to become favorites, even the bad ones. Not only that, but there is already some serious character development in the first book as Meghan starts out being an exceptionally naive and almost annoying character and grows fittingly throughout the book.

In the beginning, I thought this was going to be a horror story or thriller instead of more a Paranormal read due to the content and became grateful when about 20% in it became more the genre I was looking for. This is just personal preference though as I do not tend to read books on purpose that will make me sad or scare me. Also, being a mother myself, I found parts of it unbelievable as to how Meghan's mother would behave.

I have to say that you can tell Puck, Meghan's best friend, is seriously in love with her. So we definitely will have a triangle of sorts. The other love interest introduced is Ash who is the Winter Prince and is described well enough that you know she has some serious infatuation for him. He, on the other hand, is elusive and out-of-bounds.

The plot line was really compelling and makes you say, "Ah ha, yes that makes sense". I would definitely recommend it for anyone that reads Paranormal and Fantasy.

"Though, there are a few rare humans who can see through the mist and the glamour. Usually, these are very special individuals - innocent, naive dreamers - and the fey are even more attracted to them."

"'Don't be stupid,' Rob said mildly. 'You have no idea what you're talking about. You're thinking Tinker Bell, which is a typical human response to the word faery. The real fey aren't like that at all.' He paused a moment. 'Well except for the piskies, of course, but that's a different story altogether.'"

"He turned then, looking right through me, and I would've gasped if I had the breath. He was gorgeous. More than gorgeous, he was beautiful. Regal beautiful, prince-of-a-foreign national beautiful."

"Grimalkin's gaze bore into me. He sat up straight, flicking his tail. 'My price is this,' he stated. 'I want to be able to call on you, once, at a time of my choosing, no questions asked. That is my debt.'"
Posted by JezzebellJC at 4:32 PM