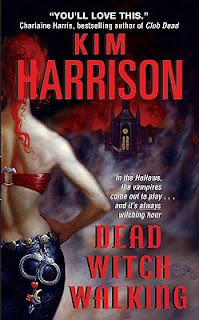 Goodreads Summary
All the creatures of the night gather in "the Hollows" of Cincinnati, to hide, to prowl, to party...and to feed.

Vampires rule the darkness in a predator-eat-predator world rife with dangers beyond imagining - and it's Rachel Morgan's job to keep that world civilized.

A bounty hunter and witch with serious sex appeal and an attitude, she'll bring 'em back alive, dead...or undead.~

I actually made the mistake of reading The Outlaw Demon Wails first in this series instead of reading it in the proper order. I admit to loving this series, and it is one of my all-time favorites. However, each book will be rated on its own merit.

Rachel Morgan, an earth magic witch, has been bringing in "Interlanders" (supernatural creatures) when they step out of line as part of the Interlander Security Bureau or I.S. for 3 years when she notices that she has not been getting any worthwhile runs for over a month. While on a run with her pixie backup, Jenks, to nab a tax-evading leprechaun, she sees her old "friend" Ivy. In the shared cab ride back to the I.S., Rachel decides to break away from the Bureau for good and ends up taking their best runner, Ivy, and pixie backup with her. This causes a death threat to be put on her head and she becomes a "dead witch walking". Together, the three of them create the runner service Vampiric Charms and take runs together and separately. After numerous hi-jinks and shenanigans occur when Rachel tries to bring in businessman Trent Kalamack for drug running, she manages to evade the worst and comes out the other side a changed witch living in a church with a living vampire and a pixie clan.

I love the idea of The Hollows. This world is very unique and I was a fan of how I learned about it and how real it felt even though it certainly isn't. A genetically engineered tomato wipes out most of the population sometime in the 60's and the supernatural's numbers are close to the human's so they come out into the open in an event known as The Turn. After this, biodrugs are illegal so there are no more cures for Cancer, Alzheimer's, and more allowed to be created. Can you even imagine living in such a place?

Then there are the supernaturals: witches, warlocks, living vampires, dead vampires, pixies, fairies, demons, werewolves. The main character, Rachel, is an earth magic witch, but Harrison doesn't just create the template versions of these types of magical beings. Earth magic witches in The Hollows create potions the old-fashioned way in a cauldron and turn them into amulets instead of the more common wand-waving witches that I am used to. Rachel is sassy, prone to bad luck, and is admittedly drawn to the wrong men. I enjoyed getting a glimpse into her head as this is a first-person book through Rachel's eyes.

Next is the living vampire, Ivy who was born with the vampire virus as opposed to the dead vampires that are closer to the creepy, no-soul, creatures of the night that I have read about more often. I really like the idea of how vampires work and look forward to seeing more of them in this series.

The best thing in the whole book to me though was the pixie, Jenks. When Rachel first meets him, she says she "finds him to be a pretentious snot with a bad attitude and a temper to match". His wife is Matalina, he has a ton of kids, and he is an expert at getting past cameras. He has the best laugh-out-loud one liners in the book and provides and excellent amount of comedic relief. Giving the itch is what pixies do third best. I personally enjoy his sayings like, "Sweet mother of Tinker Bell!"

The beginning of Dead Witch Walking was on the slow side as Harrison is laying the ground work for The Hollows and Rachel's identity. I didn't really start falling into the story until Rachel starts to go after Trent Kalamack.

There wasn't any romance in this one, but I will touch on the three main men that Rachel met (besides the oh-la-la Jenks who is obviously too small and already married). The first man introduced in person is the living vampire, Kisten. He is leather-clad with blonde hair, brown eyes, and stubble. She describes him as being dangerously pretty. Also, she notices that he has "a feral instinct governed by whim" and he scares her.

Next I met Trent. He is described so much that I actually can't touch on it all. He has transparent white-blonde hair, eyes a shade green she has never seen before, and a disarming smile. She finds him attractive but he scares her because of his reach.

Then there is Nick who is said to be somewhere between a young Jeff Goldbloom and untidy Buckaroo Banzai. I admit that I was wondering how she found him attractive if this was part of his description. He is tall, with pale arms, and a sparse build. While reading, I was trying to figure out if she even really thought he was cute. She mentions that he is safe and this one doesn't scare her, although I saw inferences to a shady past.

From the lead character in-over-her-head witch Rachel to the male pixy Jenks, who is anything but effeminate and likes to swear in Tink's name, it's hard to have a bad book with such great characters. I definitely recommend this one.

"Okay, I thought, taking a deep breath. I was living in a church - with bodies in the backyard - an I.S. death threat on me - and a vamp across the hall. I wondered if she would notice if I put a lock on the inside of my door. I wondered if it would matter."

"You forget your place. Leave Ms. Morgan alone. If you misjudge her and she fights back, it's not her fault but yours. You've made this mistake before. Repeatedly."

"What's wrong with your witch?"

"He's okay. He won't do anything to hurt you. He's got this hero complex thing going, and you seem to need rescuing. Just don't expect him to have your ideas of right or wrong."
Posted by JezzebellJC at 3:26 PM