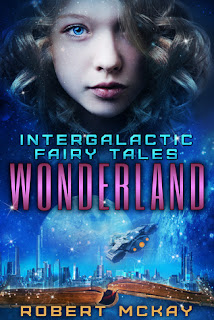 Teenage Alice didn’t mean to end up on Wonderland, but the living spaceship she commandeered had other plans, and he was very late.

Abandoned on an unfamiliar planet, Alice’s first day as a space pirate has fallen into madness. Caterpillars? Mad hatters? A Jabberwock? A queen known for chopping off heads? Alice must face all Wonderland can throw at her if she’s to take back possession of The White Rabbit and leave Wonderland in one piece.

“You are thirteen years old, Alice. You are entirely too old to be playing silly games like this on the living room furniture.” Her mother shooed her off her forecastle chair so that she could put it back in its proper place. “Right, James?”

“Right,” said Alice’s father, sitting up straight in his seat and putting on his stern face. “Pickle, you’re getting older now, it’s time to put away childish games like playing pirate.”

“And no more silly nicknames either,” said her mother, stepping over and taking the stick Alice had been using as her sword. She threw it casually into the lit fireplace. Alice watched it burn forlornly. “Right, you’ll be an adult soon enough, P— Alice. It’s time to learn how to behave like one.”


Retelling a fairy tale is really hit or miss for me. I really love most the originals so to change one drastically you really have to do a good job for me to enjoy. Wonderland did just that. Alice is a fantastic protagonist. She has that amazing childlike imagination while at the same time being naive to sarcasm. The story has a good pace with some fun action scenes. I love how the original Wonderland secondary characters were represented in this sci fi setting.


While I enjoyed the overall pace of the story, there were a few scene's that felt a bit rushed. But it's a small gripe if you wish to even call it a gripe.


If you like Alice in wonderland and sci-fi books then you will love this book. If you like one or the other you'll still enjoy it as it really fits with both fandoms. The characters are amazing, the adventure is quite the ride and if you want a new hero from the normal adult male or female Alice is for you. I found myself laughing at times and even at one point quite heart broken. I can't wait for book two.

Now Rabbit was speaking plain nonsense. “I think you may have gone a bit mad, Rabbit,” said Alice, shaking her head.
“Oh, I’m certain of it, as has all of Wonderland. If you point out everything that’s mad on Wonderland, you’ll never do anything else.”


“Just over that way, my dear,” said the caterpillar, gesturing vaguely off to Alice’s right. “But I really don’t think you ought to go there. Today is the big croquet match. Nothing gets her majesty in a heads-will-roll mood like a game of croquet.”
“Croquet? Really? I do so love a good game of croquet,” said Alice.
“All right, off you go then, I’ve got business to attend to, and you’ve got your funeral to get to. We shouldn’t keep each other from our appointments.”


"I don't enjoy cutting hands off," said Alice, the bright spray of scarlet gushing from Karl's stump flashing before her eyes.
"Well, then whatever did you do it for?" asked Seamus, just then injecting a tone of disapproval, as if cutting hands off were a perfectly fine hobby, but a deplorable thing to do if you weren't enjoying it.
"He was trying to take me somewhere," said Alice, her body shuttering involuntarily.
"Note to self," said the hatter seriously. "Avoid taking Alice places unless you want to lose a hand."


"But most of those are things that just happened. They don't really make me rare or special."
"Life just happens, Alice. What makes us special is how we react to it."


"I think that whatever it is, it can't be good," said Dum, sighing. Alice urged him to continue. "The queen loves a good beheading, so if she's not going to do that, what she has planned is going to be much worse."
"I don't think it could get much worse than beheading," said Alice. Her whole body shivered at the thought.
"Oh, there's plenty worse than beheading," said Dee, sleep still heavy in his voice. Lyla glared at him, but his eyes were still half closed and she was so tiny that he didn't notice. "There's flaying, boiling, dismemberment, eating alive--"