Review: The Queen of Zombie Hearts (The White Rabbit Chronicles #3) by Gena Showalter 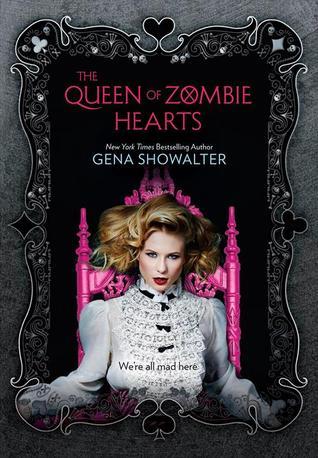 I have a plan.

We'll either destroy them for good, or they'll destroy us.

Either way, only one of us is walking away.

In the stunning conclusion to the wildly popular White Rabbit Chronicles, Alice "Ali" Bell thinks the worst is behind her. She's ready to take the next step with boyfriend Cole Holland, the leader of the zombie slayers…until Anima Industries, the agency controlling the zombies, launches a sneak attack, killing four of her friends. It's then she realizes that humans can be more dangerous than monsters…and the worst has only begun.

As the surviving slayers prepare for war, Ali discovers she, too, can control the zombies…and she isn't the girl she thought she was. She's connected to the woman responsible for killing-and turning-Cole's mother. How can their relationship endure? As secrets come to light, and more slayers are taken or killed, Ali will fight harder than ever to bring down Anima-even sacrificing her own life for those she loves.

Getting shot makes us cranky, I see.


Ali Bell has gone through a ton in this series, and it didn't stop in Queen of Zombie Hearts. She's gotten so strong over time that she is a true force to be reckoned with which makes it even better that she's so often taken for granted since she looks like she stepped right out of a children's fairy tale book. This one starts off with an ambush that leads to a full-on war and the slayers are fighting two separate enemies (a horde of soul-eating zombies and the mad scientist group Anima). There are a lot of deaths which get harder with each book since I love every single character in this series.


Text-speak gets annoying sometimes, but thankfully it's not used too much.

Finally Cole and Ali have patched things up, but this one is in no way easy on their relationship. Ali finds out one of her relatives is responsible for Cole's mother's death. Much drama ensues. There are a couple of moments where Ali seems like that young girl idealizing love that you want to shake, but she corrects herself after a few chapters which is refreshing.

The concepts are unique, the story is very character-driven, and the plot just gets more intriguing. Each book is filled with more new characters to love, a ton of action and sass. Definitely recommended.

My darling Kat meant it in the nicest way possible, of course. She simply had no filter. she always spoke her mind, always stood up for what she believed - that her way was the best way - and lived by the motto I'm On Board the Awesome Train and You Can Hop On or Get Run Over.

"You're practically glowing with happiness." Mackenzie pretended to gag. "Tell me you're still capable of killing zombies and that you're not considering spraying them with rainbow dust." As if I'd waste rainbow dust on zombies.

I leaned over her, looking for any change. Her color was returning, pink flooding into her cheeks, and the dark circles under her eyes were fading. That. Quickly. A lady never smirks. Since when have I ever been a lady? I smirked.
Posted by JezzebellJC at 12:00 AM