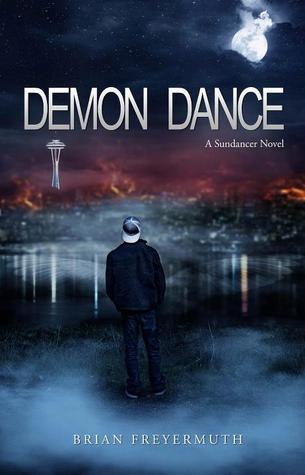 You can run all you want, but the game's in your blood. And blood never forgets…

Nick St. James was born different. His extraordinary gifts have saved him time and time again, but they couldn't save the one thing he loved most: his wife.

Now he just wants to forget his old life, but more importantly, he wants to forget the magical underworld that lives beneath the "real" world. A place where a man's faith can determine the very fabric of reality. Where ancient forgotten gods walk hidden among us, and angels and demons fight for our very souls.

But nothing stays hidden forever. Nick's peaceful world is ripped apart when a demon slaughters his ex-partner and marks him for death. Now he must use all his gifts to find the one who summoned the nightmarish creature, but more importantly, he needs to find the one thing he lost long ago.

“I wish. Spending my hard-earned cash on dancers and cheesy shows sounds like paradise compared to the mess I’m in.” The minivan swerved to miss a slow-moving Honda, and my ribs began a riotous argument with my stomach. I gasped.

“Compared to the crap you’re always in,” Jake grumbled. “I thought you retired.”

“I keep trying to tell the monsters that. They won’t listen.”


Nick St. James is my type of hero. He’s far from perfect, isn’t all powerful yet he knows how to win.  He’s the guy you root for just wanting something to go right and not blow up in his face. I personally really enjoy the detective style books involving the super natural. Plus there is plenty of action to go along with an entertaining story.


The bad for me would be lots of interesting characters popping up throughout the book that I would love to get to know better. But if this leads to follow up books where I get to learn more about them count me in.


While the romantic overtones are there between our hero and a young woman named Thelma, Nick is still haunted by the death of his true love Ann.


If you enjoy action and supernatural with an imperfect hero, then you will love this book. The main demon Nick fights with is new and interesting. I had little problem breezing through this one. It’s really a hard book to put down.

I slowly put the dragon scale in the pocket of my jacket. The wind picked up again, sending a chill deep into my bones. Rain was coming. The blond woman was nowhere in sight. I wasn’t sure she had ever existed. When one as powerful as Coyote takes notice of you, the fabric of the reality tends to bend a bit. He told me a storm was coming, and looking at the sky I believed it. Now, if it was only the weather I had to worry about.


“Hey, Jake’s on his way over. You have help this time. This isn’t Boston.”
I patted her hand and put the croquet ball down on the table. The cheerful red paint mocked me. “I know. We’re the three Ghostbusters, except the marshmallow man’s from Hell.”

“Some say they’re Illuminati, some say Masons,” I explained to her, “but no one knows. They constantly work to keep normal people innocent of the whole supernatural world, and they have the power to do it.”
“So they’re the good guys?”
I laughed without humor. “It depends on your definition. They’re only interested in keeping the status quo. They don’t care about fairness or who’s in the wrong.”

My smile disappeared as I stood up. “I’ve seen things you couldn’t imagine. Ghosts, legends come to life, demons, and angels. But I don’t have faith in any of it. Life is all chance, and it’s just our job to muddle through it.”
She stood with me, leaned forward, and gave me a kiss on the cheek. Once again the smell of jasmine washed over me, but this time the Pain drowned it all out. “And yet you still fight,” she whispered with a smile. “That’s courage.”

The girl walked up to me as I looked at the picture. “You squashed the bad man,” she whispered. “Are you an angel?”
I looked at her. “Me? I’m no angel. Just…kinda like a superhero. My power is the power of sarcasm. The word is mightier than the spur…” I stopped. “And you have no idea what I’m talking about.” She giggled again. “But thank you for the picture.”