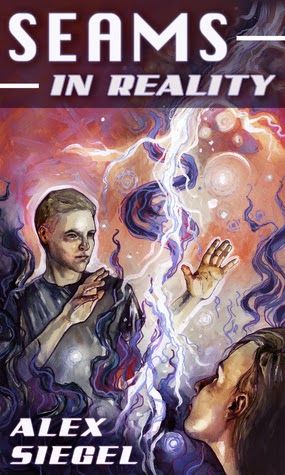 SEAMS IN REALITY is the first book in the Seams in Reality Series. As a freshman in a suburban college near Chicago, Andrew leads an ordinary life until he meets Tonya, a strange woman with an even stranger secret. She is a master sorcerer, and he becomes one of her apprentices. Tonya's other apprentice is a resourceful young woman named Charley, and they aren't the only sorcerers in the world. The United States government has an entire bureau responsible for controlling them and the special seams which enable magic. Andrew's new life takes a dangerous turn when he meets Blake, a sorcerer who knew his grandfather. Blake's thirst for power leaves a trail of casualties, and in the end, only Andrew can stop him.

"You've been suppressing your power your whole life," Tonya said. You instinctively knew it would set you apart and frighten others. It even frightened you. At some level, you weren't ready to deal with it. You're ready now, and in this place, you have no choice. Stop fighting. Open your inner eye."

First, I loved the way magic worked in the book...that seams were needed to cast most spells and that being around them too long could cause to you to lose your grip on reality. I love that the government knew about sorcerers and even tried the kill them all before deciding it was smarter to have some of them work for you and then have those sorcerers guard the known seams. I also like the two main characters, Andrew and Charley. Blake made for an interesting villain without having an overpowered feel to him.

I don't really have any complaints. At least nothing comes to mind.

The Romance is between Andrew and his fellow apprentice Charley. He wants to date her but Charley is hesitant since they work together. Plus, she's had a few bad relationships that make her a bit hesitant to focus on anything other than her magic. On the other hand, he knows how he feels about her and thinks that being with her outweighs any risk.

Overall, I really liked this book. If you enjoy a great concept with a magic theme then this is the book for you. The characters were able to pull me in and make me care about how things turned out for them. I'm really looking forward to the next book in the series. I need to know what happens next!!!!

"Enjoying yourself?" The old woman said calmly.
"I am Sir Marcus! State your buisness, wench, or I shall run you through with my sword of reckoning!"
She shook her head sadly. "This is exactly what I was afraid of. You had a tiny taste of power, and you immediately lost your grip on reality. Now you're trapped in a delusion."
"You speak, but your words make no sense, foul maid!"
"You're Andrew Kenworthy."
"No!" he yelled. "I'm Sir Marcus, Lord of the Realm."
"You're a young man standing in the basement of the Fine Arts Building of Theosophical University. I might add you have a rather silly expression on your face. It's embarrassing."


"Like I got hit in the head," Andrew said."All of a sudden, I'm a sorcerer and part of a goverment conspiracy at the same time. Being near the seam woke up something inside me I didn't know was asleep."


"The point is sprites can kill. They suck up our thoughts and memories like little vacuum cleaners. They feed on our imagination. They aren't real until we make them so with the power of belief. Until now, I've been protecting you from them while you train."