Review: The Hangman by Dee Rose 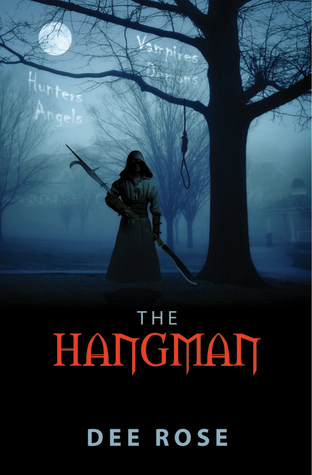 Kente Cromwell Sr. is murdered by his neighbors for committing adultery with one of his neighbor's wives. He escapes purgatory by making a deal with a demon, which includes him avenging his death and sending the souls of his killers to the underworld. He returns to earth with new demonic powers and a new name - the Hangman. However, things don't go as he plans and he reluctantly gets involved in war for the fate of mankind between demons, angels, vampires and vampire hunters. His newfound powers are the key to the war and he must decide to join the demon whose powers he possesses or join the angel who has sworn to destroy him and return him to purgatory.

Buy The Hangman by Dee Rose Today at Amazon

"Be warned, Kente." Frank took a deep breath and exhaled. "Once you use a spell from this journal, it does something to you."

"It's in the beginning of the journal. My father said he started feeling weird. He started wanting to use more and more black magic like it was an addictive drug."Frank shook his head. "The ideal of attaining more power consumed him. I'm counting on your good nature to resist that."

I liked how he brought four different types together to make the hero team. A vampire slayer that's chosen by a magical blade gifted to the first Vampire Hunter. A demon hunter following in his father’s footsteps. And then The hangman and the Angel sent to bring him back to purgatory. I loved all the different enemies they get to face from vampires to Demon possessed psychopaths. Something else I really enjoyed is the snarky moments sprinkled throughout the book. It's not all serious doom and gloom.

It did start off a bit slow for me. Rose takes the time to lay background for The Hangman and then bounced suddenly to other characters in the story. At first I wasn't a fan, but as you see why the time is taken to lay out background for the 4 heroes, it makes sense.

No real romance to speak though it does have a bit of lust in the beginning.

Overall, I really liked The Hangman. While it left me with a few questions, it delivered as far as the fighting and character building went. I felt like I knew each of the heroes, and at the same time I felt I knew who the villains were. More than just evil actions and deeds, you get the chance to know the vampires in particular. If you enjoy vampires or angel and demon books then you should give this one a read.

"Well, Bobby, looks like we came along just in time. Do you have a condom?" BA asked.
"No sir," Bobby responded.
"Just as I thought. Take this young lady home, Bobby. And shame on you."


BA's grip tightened. "Who or what are you running from?"
"My name is Larry Whitmore. And Cromwell has somehow come back from the grave. Now who are you?"
"People call me the Bad Angel."
"You're an angel?" Whitmore stopped struggling. "As hard as it is to believe, I think I'm going to have to believe it after seeing Cromwell. This means I'm dead then?"
"Not quite, Larry. I'm sorry about this, but I need some bait."


"I am Hangoctuforre, and one of the vampires you vanquished was one of my sworn enemies. I'd finally tracked him to this place."
"So you are one of the good guys?"
"Ha, ha, ha. I wouldn't say that. I just have enemies."

Buy The Hangman by Dee Rose Today at Amazon