What inspired Hunt for the Star (The Eldon Archives #1)?

Simply a desire to do something with my life and to leave something behind that people can experience (and hopefully enjoy) long after I'm gone. Fantasy is my favourite genre so that was the logical choice. That's pretty much all there is to it. That's what gave me the drive and that's how it got done. There was no "burning" story itching to get out and the writing part of it, to be frank, sucked. But chipping away one line at a time, one page at a time gave me that sense of accomplishment which was very rewarding in itself. I gave up many Friday and Saturday nights (mostly because of a lack of money and a professional commitment to my chosen sport track and field) so I think my life choices gave me time and writing a novel was how I chose to spend it.

There are scenes that are inspired by life - for instance when the Shenaar (snakemen) are running days on end, and also I love the History Channel although references there are often miniscule. At one point our heroes follow an aqueduct which was of course taken from the Romans who used aqueducts to fuel their water-lavish lifestyle. These aqueducts constructed around the time of Christ would extend for miles. The reference in Hunt for the Star is small but its meaning is explained in book 2. I've got lots of little things like that in my writing.


What was your favorite fantasy novel growing up?

I wasn't your typical book worm that grew up to become a writer, I was much more into sports. Having said that, as a youngster I enjoyed Enid Blyton's work - The Wishing Chair and The Faraway Tree and her adventure books; The Famous Five series. After that there was a bit of a gap where I concentrated more on sports and studies. When I finished school I picked up books like Lord of the Rings, Magician, Shanara series, Forgotten Realms, Star Wars Thrawn trilogy, Belgariad etc the list goes on. But by this point I was near enough to 20 - does that count as being grown up? So I guess to answer your question I'd say I didn't have a favourite book (I've never read a book twice) but Blyton's work fascinated me when I was young.


Which character was your favorite to write about?

Ko-jah. Why is your sword sheathed? If your sword is drawn, why is it not bloodied? There is directness and in that there is trustworthiness. He is loyal and always a chance to work in a bit of humour. There is a lot to like about Ko-jah. Having said that, Hunt for the Star is a book about heroes and heroes tend to have plain objectives and are governed by rules. Fast forward into book 2 and beyond and I spend time on the sorcerer, the black knight and a leprous prophet. These guys are villains. Villains often have hidden agendas and aren't governed by rules which makes them more entertaining and complex to write about.

At the moment I am writing about a character in book 3 that is an assassin with a superiority complex and a fascination with killing, yet he must adhere to a code which allows him one mark at a time. I suppose he's kind of like a medieval Dexter and this character is really running things with my pen. You know it's a good character when they write themselves. I'm very excited about it!


If Hunt for the Star was made into a movie, who would you like to see play Ko-jah?

Getting a book published was a pipe dream so I guess having it made into a movie is a pipe dream of a pipe dream and I'd be lying if I said I hadn't entertained that thought at least once. However, I've never really thought beyond that. Ko-jah is not a complex character. He's big, brutal and when there is something to be said he tells it like it is. Without thinking about it too much I reckon The Undertaker has the right vibe to pull it off. Tyler Mane is also an imposing figure and we already know he can play what I believe to be a similar character (portrayed Sabretooth in X-men)


Also would you prefer a live action movie of your book or a animated movie?

Always had thought live action, but I recently watched a remake of an anime called Berserk which was extremely well-done (graphically) although I prefer the original anime since the movie cut quite a few scenes. The animated Beowulf was also a great example of an animated movie so if that was on offer I think Hunt for the Star would look awesome.


Do you need anything to write? (particular snack, drink, music) Do you prefer it to be quiet or do you like a bit of background noise?

Peace and quiet is ideal. I like my cups of tea and this year I have experimented with classical music whilst writing. At the moment it's 17th century classical music - seems to get me in the mood to write town or village scenes.


If you had to write in a different genre other than fantasy which one would you pick?

Horror I think is just a short leap away from what I am/have done, as is scifi. Honestly, I think I could have a crack at anything even erotica, however a "50 Shades of Ko-jah" might read somewhat abrasive.


You're stuck at the airport about to take a long flight. You can have one book to take with you and it can't be your own, which one do you choose?

I have recently acquired the Night Angel trilogy by Brent Weeks in one big book and I have read #1 on its own and loved it. He's definitely one of the better fantasy authors going around IMO. Then there is The Name of the Wind by Patrick Rothfuss. I haven't read this one yet but it's VERY high on my to read list. So I guess it's a toss up between the hype of TNotW vs NA trilogy - which I know will deliver. Maybe it's a bit unfair but I am leaning towards Brent Weeks because I can enjoy three books in one. 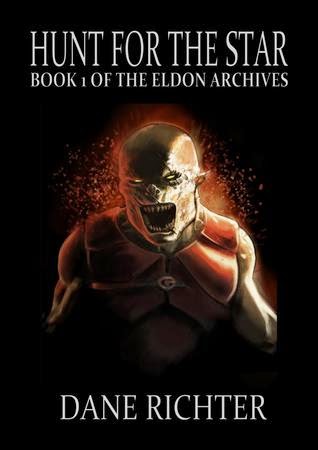 Edoria is at war. Artos Hestrom retreats back to his home town of Corsin where he is given the task of retrieving a powerful crystal called the Eldon Star. The ageing Artos uses lies and deceit to procure people to help him on the journey and the plight of a half-man, half-elf called Chet, provides the perfect cover. Artos' nephew, Ethan, freely volunteers to accompany him without knowing his true motives, but Ethan's death has been foreseen in a vision. Knowing that Ethan would certainly die if he continues on the journey, Artos must choose between the fate of his family and the fate of the world.

Standing in his way is the evil Sorcerer, Ruehl, who has waged war in Edoria with his blood-thirsty hordes of Kròkos. Ruehl uses his minions to relentlessly scour the land for the crystal. Betrayals, challenges and loss set up a final confrontation with the evil Sorcerer where there can be only one victor.

Born in 1981, Dane Richter spent his early life growing up on a farm located about an hour east of Perth, Western Australia. A love of Enid Blyton’s works first introduced him to the world of fantasy and adventure and with time, shifted to works by Tolkien, Feist and Tad Williams which opened a wider spectrum of the fantasy genre.

Although a deep-seeded passion for adventure and storytelling existed, during his high school years he had an aptitude for sport, excelling at track and field. Quickly rising up the ranks of Australia’s elite, he represented Australia in high jump at the IAAF World Junior Championships in 2000. He continued athletics for over a decade with personal bests of 2.19m in the high jump and 50.46s in the 400m hurdles and although he won numerous Australian national medals, a career dogged by injury saw him missing out on the 2002, 2006 and 2010 Commonwealth Games.

Writing was a passion for Dane throughout his track and field career, beginning in 1999 and finishing the first draft of Hunt for the Star in 2003. With education and sport a primary focus, time afforded to writing was limited. Dane honed his skill over the next few years with affiliations to Tom Collins Writers House and the Speculative fiction group KSP Writers centre, whilst penning a sequel, Rise of the Deceiver.

Dane completed a Bachelor degree in Commerce majoring in Accounting and Marketing in 2003 and worked in coaching and education over the next ten years with a brief stint as a freelance writer in 2006, publishing 23 articles as a sports writer for the Perth metro and country based paper, Community News Group.

In 2011 Dane was introduced to Hal Colebatch - a contributing author to Larry Niven’s military sci-fi series, The Man-Kzin Wars. With Hal’s mentoring, Dane got his start with a small independent press who published the paperback version of Hunt for the Star in 2012. In 2013 Dane released the ebook, which is available on Amazon.

Email ThisBlogThis!Share to TwitterShare to FacebookShare to Pinterest
Labels: Interview