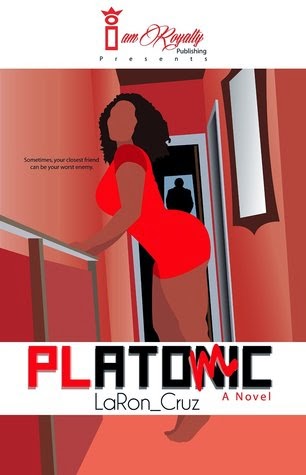 Can a man and a woman be platonic friends without someone wanting them dead? Cameron and Taylor share a rare bond that very few people can appreciate. They're best-friends. Their interactions lead onlookers to assume that there's something way deeper than "friendship" happening between the two of them. So much so that it's driving both Cameron's & Taylor's romantic interests crazy. Literally.

When an associate is hit during a botched assassination attempt on Cameron's life, he has little time to figure out who's behind the madness before another attempt is made. Will he be able to get to them before they get to him or will Taylor's black dress be forever stained in mourning her beloved friend?

"A rapid release of emotions resembles an atomic bomb: explosive and deadly, destroying everything around it when those emotions are released. When the platonic meets the atomic it becomes... Platomic."

*Summary edited due to explicit language

“Can a man and a woman be platonic friends without someone wanting them dead?”

Let me preface this review with 2 very important disclaimers.  #1 This book is considered “erotica”.  That is not my genre, and I am not sure I have ever read a book in that genre before.  So I can’t compare it to others in this genre.   #2 the author is a near and dear friend of mine.    I wasn’t sure what to expect going into the book or the review.   I am kind of hard on books, and I was left wondering if I could deal with writing a review on a book I may or may not like.   This being his first self published book, I went in blind not know what to expect.  That being said, I read the book as if I was reading something from a complete stranger.  And well this is what I thought………

This book follows best friends Cameron and Taylor.   Their friendship is a bond that runs deeper than most.   Once Taylor decides to move to Dallas to start her life over and be closer to her best friend, things start to get a little crazy.    After an attempt on Cameron’s life, he is in a rush to find the want to be killer before they try to kill him…. AGAIN.


A BEST FRIEND IS THE GREATEST THING SINCE SLICED BREAD


This book was a very quick and easy read.   I read it in a matter of a few hours.   When I started reading it, I wasn’t sure how I felt about it at first.   But by the end of the book it grabbed my curiosity and I needed to know where the story was going.    As far as it being “erotica” yes there are several “love” scenes, but it’s not the focal point of the book or the story.  There is a solid story line in the book.   The lead character Cameron is multidimensional.  Sometimes I thought he was a jerk and sometimes thought he was deep.  I agreed with some of his views, despised others.   But that is the makings of a good character.  I am usually really good at figuring out all the plot points and endings.  Well not this time.  I was pleasantly surprised at the ending.   I didn’t figure the killer at all.   And I am a sucker for a good murder mystery, especially one when I didn’t peg the killer in chapter 1.  I could see certain aspects of my relationship with my best friend in Cam and Taylor’s relationship.   It’s always nice being able to see a little of your life in the characters you are reading about.


FRIENDS CAN BECOME YOUR ENEMY


My only real complaint about the book is while the characters are interesting.   I don’t feel like I really knew them beyond just the surface.  And when the first attempt was made on Cameron’s life, I didn’t know him well enough to have a real feeling of terror or sadness over this.  I did find I cared more deeply for a few of the minor characters than I did the 2 main characters.   This being a first book, there is plenty of room for growth and depth of these characters.   That is the only major thing this book was missing to me.


Overall this book is a very short, fun read.  I was pleasantly surprised by the ending.  And really enjoyed trying to see where this journey ended for Cameron and Taylor.    Hope to see more from them in the future.   Hopefully the next installment that stars them will bring new depth to the characters.

What inspired you to begin writing?

I've always been lauded for for my ability to put words together in a way that makes a person think differently or entertains or whatever my goal is in general conversation. I figured that writing those words would give me more reach as well as more time to actually formulate thoughts and ideas to increase the depth of my delivery, so I began writing.

How did you come up with the concept for Platomic?

The title "Platomic" is a combination of the words "platonic" and "atomic". I was thinking on how people view male/female friendships and the taboo surrounding them. How friends sometimes get into situations where deeper feelings come into play and they hesitate to go into a relationship for fear of losing the friendship they share. The story itself is an embellished look into such a friendship, but not between who you'd first suspect. There are examples of both types in the book: the true friendship that isn't marred by misunderstood feelings or emotions, even though there is sex involved and the friendship where one of the friends loses control and acts out.

How do you mange to straddle that thin line of keeping your character true to his nature but also keeping him likable to the female audience?

You know, when I wrote Cameron, I didn't bother with trying to keep or even make him likable. I just made him Cam. Like most people, he has his different moods and reasons for those moods. His thoughts are fairly deep. In his speech, he's very witty. In his actions, depending on the recipient, he's as most of us are. I know we'd like to think that we're all unbiased and treat everyone the same, but doing so is illogical and foolish, in my opinion. Some people we handle with angst, some we treat with aggression, some we handle with care. If the readership finds Cameron likable, it's simply because he's human. People can relate to him or know someone like him, which makes for a believable character.

Why do you think Cam & Tay's relationship was able to stay intact, despite all the obstacles they faced?

Cameron and Taylor both have the misunderstanding that the world revolves around them individually, but when they come together, the world revolves around them as a pair. No one wants to be cold and disapproving all the time. They offer each other an escape and a chance to be warm and loving...that's their addiction to each other. They give each other balance. As far as the obstacles they face together, they are as any two loyal people are supposed to be. They may get frustrated or angry at each other, but they're brought even closer together when adversity strikes or when one of them is threatened. Their friendship is a true friendship.

Tell us a little about your next project, "The Family".

I wouldn't consider "The Family" a sequel to Platomic, though both Cameron and Taylor are present. It's set after Platomic's ending. The Family is a growing group of swingers who come from a wide array of influential backgrounds: politicians, CEOs, lawyers...as well as a pair from a Spanish drug cartel. They enjoy the being able to live the swinger's lifestyle in a controlled environment. So much so that that they're willing to kill in order to protect the secrecy of the group, for if it ever gets out that politicians are in league with drug dealers, all hell will break loose. Alejandra and Wilson (from Platomic) were actually members of The Family years before the setting of "Platomic". In chapter 23 of Platomic though, one of the original members of The Family is introduced in a steamy scene exposing why Alejandra and Wilson are no longer members. I'm excited to write this one. The challenge will be in writing 5 to 6 couples. That's 12 personalities to keep in order and interesting along with maintaining Cameron and Taylor! There's also a surprise guest in "The Family" from Platomic. Can't wait for you all to read this one! Stay tuned!

Get Platomic Today From Amazon