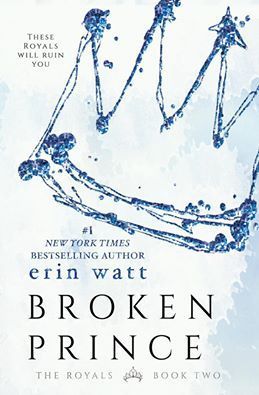 These Royals will ruin you…

From wharf fights and school brawls to crumbling lives inside glittery mansions, one guy tries to save himself.

Reed Royal has it all—looks, status, money. The girls at his elite prep school line up to date him, the guys want to be him, but Reed never gave a damn about anyone but his family until Ella Harper walked into his life.

What started off as burning resentment and the need to make his father’s new ward suffer turned into something else entirely—keep Ella close. Keep Ella safe. But when one foolish mistake drives her out of Reed’s arms and brings chaos to the Royal household, Reed’s entire world begins to fall apart around him.

Ella doesn’t want him anymore. She says they’ll only destroy each other.

Secrets. Betrayal. Enemies. It’s like nothing Reed has ever dealt with before, and if he’s going to win back his princess, he’ll need to prove himself Royally worthy.


This series is a train-wreck that I can't stop watching. The characters in this book are all messed up, and not just the usual 'flawed'...they are seriously messed up. The phrase 'broken' describes Reed rather well. I can't help but get sucked in to the crazy chaos in these pages. I've compared it to Gossip Girl in the first one, and I think that still applies. It's a bunch of people who have money to buy them out of almost anything they come up against so they feel the right to do anything.

There's the Royal family who all have one sick problem or another. However, I can't help but root for them and hope everything turns out in their favor. Why do I even like these people? The authors are just that good. I can't stop reading. I devoured these pages.


Reed seriously screwed up in Paper Princess. I can't really say much about what happens in the romance department in this one without spoiling everything. There is a lot of back-stabbing, blackmailing, breakups, hookups, and twisted sordid affairs.

I can't stay away. The pages just suck me in and won't let me go. It's a mess with so much wrong morally that I can't even mention a lot of it. It's a bunch of rich and spoiled crazies with drama on 10.