Review: The Raven Boys (The Raven Cycle #1) by Maggie Stiefvater 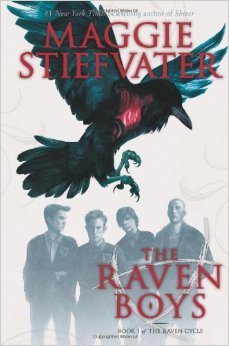 Every year, Blue Sargent stands next to her clairvoyant mother as the soon-to-be dead walk past. Blue never sees them--until this year, when a boy emerges from the dark and speaks to her.

His name is Gansey, a rich student at Aglionby, the local private school. Blue has a policy of staying away from Aglionby boys. Known as Raven Boys, they can only mean trouble.

But Blue is drawn to Gansey, in a way she can't entirely explain. He is on a quest that has encompassed three other Raven Boys: Adam, the scholarship student who resents the privilege around him; Ronan, the fierce soul whose emotions range from anger to despair; and Noah, the taciturn watcher who notices many things but says very little.

For as long as she can remember, Blue has been warned that she will cause her true love to die. She doesn't believe in true love, and never thought this would be a problem. But as her life becomes caught up in the strange and sinister world of the Raven Boys, she's not so sure anymore.


By the end of The Raven Boys, I was convinced that this was a work of character development and an incredibly original story. If you are a character-driven reader, this story could very well appeal to you. On the surface, these characters could come off as stereotypical. You have trailer park trash wanting to rise above his family and dreams of having the kind of money his friends have. You have the boy with the troubled past that comes off as abrasive and you shouldn't mess with him. You have the posh, incredibly wealthy but nice guy who talks in words the others most likely have to look up on occasion. Then you have the quiet, no one really notices outcast boy to round them out. In addition, there is the girl that desperately wants to be a part of this group because she needs something big to make her different and able to stand out.

That's what they may come across as on the surface. However, Steifvater magically weaves the human intricacies that make us all unique into each and every character. There are little tidbits of their personality that you glean from the pages that are like tiny surprises you were't expecting. It's a lot like getting to know someone on a deeper level that you had previously judged incorrectly. I find myself wanting to know even more.

Add to that the unique mythology that makes up Gansey's quest and the magic therein along with a houseful of psychics on the side and it's an incredibly interesting story with quite a bit of surprise and humor mixed in.


One of the things that is hard about reading The Raven Boys is the way Steifvater jumps back and forth on things and adds random information in the middle of a topic. She will be telling you how one of the characters is sitting there, then jump to a random history lesson of something that character was thinking, then to how hot it is in the car, back to the original conversation the character is having with someone else. It can be quite disconcerting and definitely takes some getting used to. I basically had to let go of any valid timeline my head was trying to keep track of and go with the flow of the story as it was presented.


Well, there is only one girl in the group of boys. I think a few of the boys are intrigued by her, but currently one has more interest over the others. Unfortunately for Blue, romance for her isn't going to be able to go anywhere good since the prophecies say she will cause her true love to die. We'll see more on that in future books I'm expecting since this wasn't really explored a lot in The Raven Boys.

I quite enjoyed it. Once I got over the lack of solid timeline in the way the story was written, I was able to just digest the information we were given. Steifvater delivers on intricate details of each character and causes me to feel as if I am also a part of this group. They've gotten under my skin and I want to know more. The magic that lies within has me curious to where all this will lead and the psychics are a funny addition with their eccentric natures and conversation. Recommended for character-driven readers.