Review: The Dream Thieves (The Raven Cycle #2) by Maggie Stiefvater 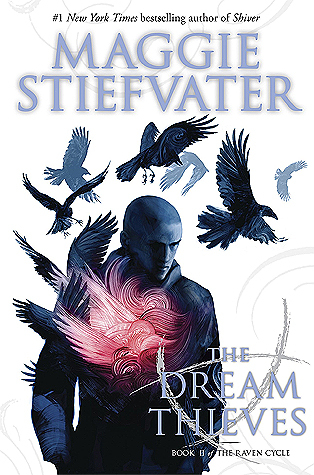 If you could steal things from dreams, what would you take?

One secret: Ronan can bring things out of his dreams.

And sometimes he's not the only one who wants those things.

Ronan is one of the raven boys—a group of friends, practically brothers, searching for a dead king named Glendower, who they think is hidden somewhere in the hills by their elite private school, Aglionby Academy. The path to Glendower has long lived as an undercurrent beneath town. But now, like Ronan's secrets, it is beginning to rise to the surface—changing everything in its wake.

Of The Raven Boys, Entertainment Weekly wrote, "Maggie Stiefvater's can't-put-it-down paranormal adventure will leave you clamoring for book two." Now the second book is here, with the same wild imagination, dark romance, and heart-stopping twists that only Maggie Stiefvater can conjure.


While the first book was an introduction into the characters and purpose behind the story, I felt like The Dream Thieves was Ronan's deeper look as his adventures are in the forefront of this one.

Don't get me wrong, all the characters get a chance to shine, but the basis of the story this time is about Ronan's extraordinary power to take things from his dreams. This concept was a very fun one to explore and made me think about how hard it is to even remember what I dream.

In addition to the characters that had already captivated me in the first book, we are introduced to a few new ones. The Gray Man was the one that had me the most curious. Obviously with this name, I'm assuming he's going to be that 'not all bad - not all good', in all the gray areas character and he didn't disappoint. You really can't predict his moves.

While the plot reveals a lot of answers to previous questions that came up, there are definitely more questions popping up all over the place along with those answers. There is a good mix of twists and turns, and also just flat out mysteriousness. The pacing was well done. While not outright action packed, there was enough character gratifying moments to keep everything moving well.

I'm enjoying the way it's written more now as well. Stiefvater's voice is definitely different and I have problems with her jumping around every now and then, but I'm fully into the series now and am not only used to it but also enjoy the graceful, mystical quality it adds to the book. She also says that time is circular.


I'm a big fan of Ronan's, but if he is not one of your favorites you may miss time with some of the other characters.

There were a ton of parts with The Gray Man and Kavinsky which is also a new character and I wish they would've had a little less page time as I felt Blue and Gansey were not near as present as I would've liked.


A wonderful follow up to The Raven Boys. While the second book in a series isn't usually a strong one, this was a great place for the series to go after the initial introduction. I enjoyed the characters, felt closer to them, watched them grow, and saw some new characters added to the mix. I thought the pacing was well done and am enjoying the concept with the mysterious and magical aspects it includes. Recommended.