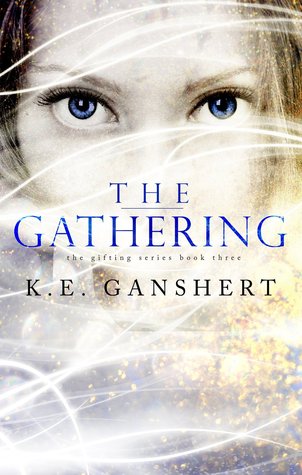 "Darkness is a tricky thing. Especially when it cloaks itself in light." Luka isn't dead. He's not beyond saving. Tess knows because she saw him with her own eyes. After what she saw, she's sure of one thing: If they don't rescue him soon, Luka won't be Luka anymore. If only she could convince the other members of the hub. They're not sure Tess saw what she claims she saw. And they're preoccupied by the fact that their kind is being systematically eradicated. Answers lie in an ancient prophecy, one that revolves around a seventeen-year-old girl who never asked for any of this. K.E. Ganshert's final installment in The Gifting Series brings readers on an action-packed journey through loss, sacrifice, betrayal, and the impossible choice between what we want most and what we know is right.

I find that I'm sad to see the story over. I'm still very attached to the characters and the world there. I love the mixture of this dystopian world with the paranormal elements of hopping, talking, and fighting through the dream world. The action is incredible, and there is the uncurrent of not being able to trust anyone that I enjoy in stories. I appreciate that at any moment, someone can turn bad.

What makes this series so interesting is the great plot and world mixed with crazy twists and turns. In each book, they are in a different place. This time they are traveling some, and the bridge they went over had my heart thumping like crazy. Then they were in another remote location with more new characters thrown in. I love that each story had some new characters as well and still kept the old. I also think it's great that Ganshert is not afraid to kill off characters. It makes the story that much more impactful.


The only gripe I have about The Gathering is how the end seemed wrapped up so quickly. There was a lot going on through this series, and the resolution seemed to creep up on me out of nowhere and end before I was prepared.


There's a normal teen romance in this with hurt feelings, jealousy, and infatuation. I enjoyed seeing Luka and Tess grow into a better understanding of each other and finally talk more about how they feel about things. I enjoyed the love they shared and can see it lasting.

This is a great series, and The Gathering is a wonderful way to wrap it up. I happened upon this series through the first one being free on Amazon, and am not at all disappointed to have read this gem. It's got a great mixture of loss, death, hope, frustration, love, stubbornness, and redemption in the pages. I loved the characters and was amazed at how many couldn't be trusted or turned out to be a friend in the end. The twists that the story took and all the locations were fantastic. I loved mostly though watching Tess and Luka together fighting in the dream world against the darkness. The Gathering is an excellent end to this great series. Definitely recommended!

There are no blood-curdling screams. I peek over the crates and my knees almost buckle. Thirty or forty yards ahead, in the same spot as before, Luka sits on the ground, his back propped against a metal beam. His body does not twist in agony. His hands do not clench into fists. His shirt does not stretch against his taut muscles as he arches up in torment. This time, he's deathly still. And he's no longer surrounded. Only one white-eyed man stands guard.

They were prohibited a long time ago, after we removed the second amendment from the constitution.

I am officially the nation's most wanted criminal. With a quarter of a million bounty on my head.
Posted by JezzebellJC at 12:00 AM