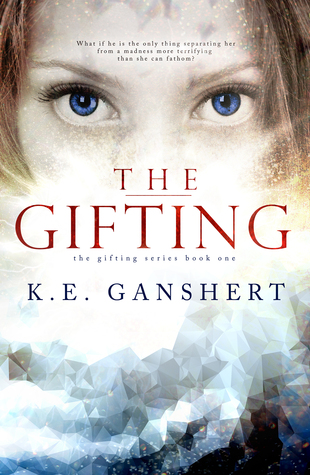 "If science is right, then I am crazy. And crazy is dangerous."

In a world where nothing supernatural exists, Tess Eckhart is positive she’s going crazy. After her complete freakout at a high school party, her parents worry she might be right. So much that they pack their bags and move across the country, next to a nationally-renowned facility for the mentally ill.

Tess is determined to fit in at her new school, despite the whispers and stares. But when it comes to Luka Williams, a reluctantly popular boy in her class, she’s unused to a stare that intense. Then the headaches start, and the seemingly prophetic dreams that haunt her at night. As Tess tries harder to hide them, she becomes increasingly convinced that Luka knows something—that he might somehow be responsible.

But what if she’s wrong? What if Luka Williams is the only thing separating her from a madness too terrifying to fathom?

"Just because a lot of people believe in something doesn't make it true."


I couldn't stop reading this. I can't put my finger on exactly what had me hooked because as I look back it seems like a pretty normal book, but I had to finish it. If it wasn't for work and being a responsible adult, I would've gotten it done in less than the day that it took.

Without getting too spoilery, the setting is wonderful. It's our world, but it isn't. There are a few huge political changes that make it seem like a parallel to the world we live in. It's so easy to imagine this world and become immersed in it, since it is so similar, while at the same time wondering how you'd feel if those few changes really were thrust on us.

The characters in this were marvelous. We have some true teen personalities that I remember seeing when I was in high school. We have characters that seem to change drastically overnight and some that are incredibly mysterious.

It's in this world that we have Tess. She's moved with her family quite often, but this most recent time is her fault. She sees things she shouldn't...hallucinations in classrooms and friends' houses and her dreams of people dying never cease. What makes matters worse is that people with mental illness in this world are considered a 'burden' and sent to a rehabilitation center. But are they really being helped?

The BEST part of The Gifting though is that the entire time reading I'm wondering if what she is seeing is real or if she is a delusional schizophrenic. Either way, I'm fascinated by her story.


There are cliches within the pages, mostly about the 'amazing' boy being interested in little ole normal main character girl. Only Tess isn't so normal.


Tess is a freak. Luka is the all-american poster boy for talented handsome gentlemen. These two have undeniable chemistry and I love watching their interactions. Tess gets a little head over heels and flustered around him while also not trusting that his interest in her is sincere. I'm enjoying the romance here so far. Luka is a character I love so I'm hoping things work out well.

I read The Gifting so quickly. It mixes Paranormal and Dystopia seamlessly and the action parts are both mysterious and thrilling. I immediately bought the second book in the series right when I finished it. While it ends in a cliff-hanger, the story is at a breaking point. The characters are quirky, fun, and intense. The world is so similar to ours and yet light years different and I am fully invested in where this story is going from here. I got The Gifting for free on Amazon. I would absolutely recommend reading it whether free or not.

According to science, humans have no souls.

It's been a good first day. The best, actually. No headaches. No weird feelings. No unexplained cold or warm presences. Just school and a friendly girl and a much-too-noticeable boy.