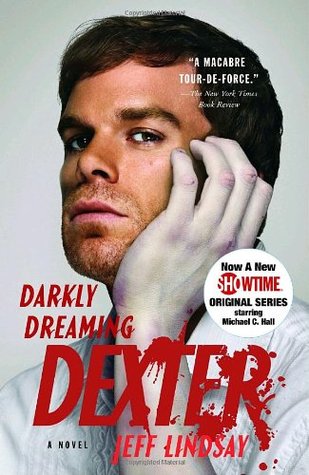 Meet Dexter Morgan, a polite wolf in sheep's clothing. He's handsome and charming, but something in his past has made him abide by a different set of rules. He's a serial killer whose one golden rule makes him immensely likeable: he only kills bad people. And his job as a blood splatter expert for the Miami police department puts him in the perfect position to identify his victims. But when a series of brutal murders bearing a striking similarity to his own style start turning up, Dexter is caught between being flattered and being frightened -- of himself or some other fiend.

I have been away from this review thing for a while.  Between work, school, moving, and remodeling a house I just haven't had time to do much else.   However, I am back :)
I have had this series sitting on my bookshelves a while.   I fell in love with the show and started buying the books.   However, I have never read them until now.   We recently went back and watched all 8 seasons of the show and it inspired me to finally read the books.  So be expecting reviews on all the sequels in this series.  Cause who don't love a good serial killer story, right?

Dexter Morgan comes across as your average everyday middle America kind of guy.   However, it is all a clever rouse, a character created by Dexter and his foster father Harry to hide his "Dark Passenger."  Yes, he is a serial killer, but instead of blindly killing, he lives by a code.  He only kills people who do unthinkably bad things that were never brought to justice.   He is a master at his craft, or so he thought.   Recently a string of murders start popping up around Miami.  They are expertly done.  They are neat, clean, and Dexter is fascinated by this.   Does he have a superior rival, or is this the making of a wonderful partnership?

“Life's only obligation, after all, was to be interesting.”-Dexter Morgan


This book and the first season had a lot of similarities and a lot of differences.   So if you have seen the show you will be vaguely familiar with the basic story line.   But it is essentially a totally different story and outcome.    In the book you get a deeper look into Dexter's mind.   This Dexter is darker and a true sociopath, unlike it's counterpart in the show.   I like the darker Dexter.  He is also more comical to me.  It is a darker sense of humor, but coming from the girl that loves horror movies and books about serial killers that is my kind of humor.   I actually really loved some of the directions the book went.   At one point Dexter was unsure of his sanity.   Could he be blacking out and be the very killer they are trying to hunt?   In comparison to the show you always knew the killer was out there.  In the book, you are not sure if the killer is someone else or Dexter.   The characters from the first season are in this book.  So there are a lot of familiar faces as well.  But don't get attached to the characters you may have loved in the show.  One thing that I loved was that the show decided to kill off different people.  So the book's deaths were a surprise to me.   Doakes is probably one of my favorite supporting characters in the show, just because he makes me laugh.   So when reading about his character, I could see and hear him which made my reading experience even that much more entertaining.   And even though Dexter's personality is way darker I still heard Michael Hall's voice narrating Dexter's thoughts in the book :)

“I did not like this feeling of having feelings.”-Dexter Morgan


Ok, so being a huge fan of the show (I have watched it thru a few times).  I had a preconceived notion of who the characters were.  In the book a lot of them fell flat.   They aren't really well developed.   It may just be that it is the first book and character development hasn't had time to prosper yet.   But I would have liked a little more attention toward making the characters a little more 3 dimensional.   Also I felt the ending was a little rushed.   There was no real build up.   It was like we are looking for this guy and here he is kind of situation.   Was it bad?  No, not necessarily, but I think it would have had a deeper impact if the build up was a little more intense.

“It’s like, everything really is two ways, the way we all pretend it is and the way it really is”-Dexter Morgan


Overall, I really enjoyed the book.  I was a little iffy at first.  I thought this is an instance where the show is actually better than the book.  The jury is still out on my overall opinion on that.  But as I read on the book really grew on me.   I love Dexter and the uniqueness of how he views the world.   There were many comical moments which is always great when you have such a dark book and story.   I am hoping that as the series progress the characters become a little more fleshed out. I am excited to see where this story line takes the characters I already know and love.   Worth the read for sure!

“Weren't we all crazy in our sleep? What was sleep, after all, but the process by which we dumped our insanity into a dark subconscious pit and came out on the other side ready to eat cereal instead of our neighbor's children?”-Dexter Morgan