Shards of Reality (Seams in Reality #4) by Alex Siegel 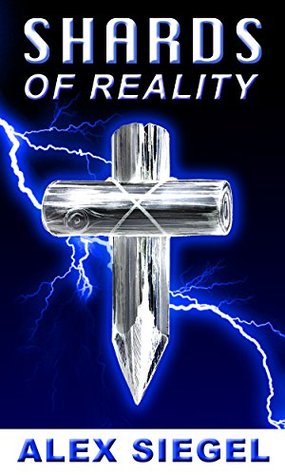 Lies, betrayals, and massacres have ruined the fragile peace between normal people and the community of sorcerers. Now the FBI is watching. Even the President of the United States is fearful and suspicious. If the sorcerers make a single mistake, they will be permanently imprisoned for the sake of "public safety." They are surrounded by enemies and can only rely on each other for protection.

The apprentices, Andrew and Charley, must build a path to peace, but they have a formidable adversary. Frank Webster, the former director of the Bureau of Physical Investigation, wants to see sorcery banished. He uses torture and murder to achieve his objectives. The conflict can only end in total victory for one side or the other in the climax of the Seams in Reality series.

The other three books in the Seams in Reality Series are SEAMS IN REALITY, CRACKS IN REALITY, and BREAKS IN REALITY. Interested readers might also try APOCALYPSE CULT, the first book in the Gray Spear Society Series. That book is permanently free.

"And now you want me to betray that trust."

"You make it sound dishonorable. This is a matter of national security."

"Whenever somebody tells me that," Tungsten said, "bad decisions usually follow. You should calm down. Blake and Phillip are dead. The immediate danger has passed. It sounds like you're the one stirring up trouble now."

Andrew and charlie are back and now have to deal with the fall out from book 3. The former BPI director has turned into a total tool trying to have all sorcerer's locked up as his paranoia knows no bounds. I love when the villian is believeable and worthy of my disdain. The sorcerer's are trying to decide between skipping to another country or trying to work it out with the goverment. I honestly would love to see them skip town and see them in a new enviroment. Also it's interesting to see the sorcerer's try and decide what's moral and what isn't as far as using their powers.

Ever read one of those books that has a good ending it's just not the one you would have chosen? This would fall in that category for me.

Andrew and Charlie are still in love and flirting with danger. Will they rush their relationship a bit to fast and if so will that change who they are?

Overall I loved the series and the last book did it justice. I would have liked a different ending but I can live with this one. All things considered I would recommend this series to anyone looking for a different take on a sorcerer tale.

"The old rules are gone." "The difference between right and wrong is still perfectly clear. Any type of mind-control is forbidden. So is using illusions to swindle and cheat people."


"Do you think he's performing experiments on our missing people?" Tonya said.
"It's very possible. It wouldn't be the first time sorcerers were used as lab rats."


Tonya nodded. "That's generally how it happens. The sorcerer turns a sprite into a deceased lover or parent out of grief. Of course, it's not a stable relationship. Inevitably, the sorcerer has a moment of weakness, and the banshee starts feeding on him."
"What happens when the sorcerer goes to sleep?"