I am Sleepless: Sim 299 by Johan Twiss 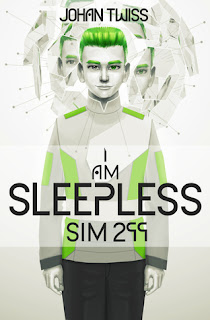 The planet Ethos is at war with a mysterious enemy known as the Splicers. Their only successful defense is the Prime Initiative. All newborns with the compatible genetic code are taken from their families and injected with the Prime Stimulus. Each child that survives the stimulus develops an extraordinary ability and is conscripted into the military for training.

After turning twelve, Aidan is moved to the upper-class at the Mount Fegorio training complex. His special gifts allow him unprecedented success in the virtual training simulations, advancing him further than any prime cadet in history. No one knows what lies after sim 299, not even Director Tuskin, the ruthless and reclusive ruler of their planet. But something, or someone, has been guiding Aidan there. If he can pass the final tests, he may discover the key to ending the Splicer War.

Buy I am Sleepless: Sim 299 by Johan Twiss today at Amazon

“ Anyways,” Palomas continued. “I’m off to my room. Good night, losers. I love you guys.”

Aidan smiled. Since his first memories formed of them learning to communicate as one-year primes, Palomas had signed the same thing to their coterie family every night, Good night, losers. I love you.

“Love you too, sis,” replied Fig and Aidan in unison.

Well it has a strong enders game feel to it. They are kids picked because they are special. They are training to fight an alien race that is coming for them. But it's different in that the enemy seem's to be an actual threat. They also train via computer simulation and all the kids participate in a simulation on their free time. But instead of just being extremely smart the kids all have special abilities Depending on how the stimulus effects them. So far i really like all the characters that have been introduced. You get a good feel for how the program effects everyone from the kids to the family that is left behind.

I don't have any complaints.

No real romance with the main character as of yet. Though there is some interesting heat between support characters.

I'm in, give me book two already. If you enjoyed enders game in particular or just Sci-fi in general you'll want to check this book out. It has some great character development so far and does a great job getting me invested in their future. The action is fun, the abilities are fresh and exciting and the pace never felt like it was dragging a long. I'm definitely a fan boy of the series so far.

“Relax, Fig,” Aidan said between breaths. “This is what we’ve trained for since we were kids. Now we have a chance to test our skills against other cadets. Plus, we have an advantage.”
“We do?”
“Yeah. I just stepped in bearcat dung.”
“What? Gross. How is smelling like you haven’t showered in a month an advantage? We’re so dead. Dead I tell you. Dead. Dead. Dead.”


"You’re up, Fig." Fig adjusted his sweaty hands on the controls of his suit.
They turned a lighter shade of blue as he squeezed the controls. "You are the man. You can do this. Breathe," he whispered to himself.
"Fig! Go now you little blue midget!" Palomas tapped impatiently.


Zana’s blue face turned three shades paler. “Okay, that looked really painful. Did you hear how he screamed?”
“Zana. He’s a lug. He can’t scream,” Dixon said, trying to hide his own fear.
“I know that. But imagine if he could scream.

“Yes and no. You’ve met your challenge well this day and you are now allowed to return home, but you must return in three weeks to complete your quest. All three of you must return, or there will be grave consequences.” Aidan, Dixon and Zana eyed one another. A simulation couldn’t threaten them in the real world, could it?

Buy I am Sleepless: Sim 299 by Johan Twiss today at Amazon