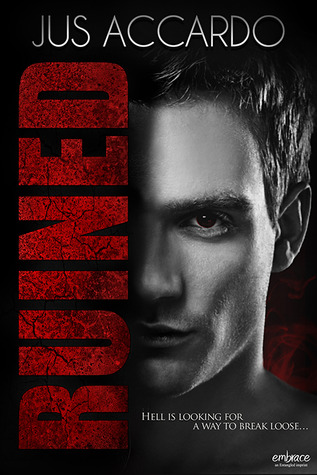 Hell is looking for a way to break loose…

Jax lost the genetic lottery. Descended from Cain, the world's first murderer, he's plagued by a curse that demands violence in exchange for his happiness. He left everything behind, including the girl he loved, but thriving on the pain of others is lonely… And it's killing him.

After a series of heartbreaking losses, Samantha put rubber to pavement and headed for college as fast as her clunker could carry her. But she can't outrun her problems. When an attack at school drives her back home, she's thrown into the path of a past—and a guy—she's been trying to forget.

Sam strains Jax's control over his darkness, but running isn't an option this time. Someone—or, something—followed her home from school: a ruthless monster with a twisted plan centuries in the making. Forced together to survive, and fighting an attraction that could destroy them both, Jax and Sam must stop a killer bent on revenge.

"I on the other hand was rotten fruit. The deformed apple that fell to the ground too early and had gotten picked at by animals. I was all the bad habits and diseased bits from the drain of the Flynn family genetic tub."


So, what if you were born cursed? What if because someone in your ancestry forever ago committed a sin you are now forced to share your body with a demon? That's where our main character, Jax, finds himself. He's sidled with a demon riding shotgun in his head all because of that first murder ever committed by Jax's ancestor Cain. While Jax may be a caring and good person, the actions that his demon demands of him most certainly aren't. Jax's demon craves violence and sends him images of the destruction it wishes to see Jax cause.

This story is told between alternating POV's of Jax and Sam. Sammy is the girl next door, literally and figuratively. They have very different voices and it's nice to get the change of pace so I enjoy this POV setup for Ruined. The plot line is one that I haven't seen before and I thought the take on Cain's descendants was very unique. The setting and world-building feel like we're just at the tip of the iceberg on more interesting things that could come, but I wasn't left confused. All the information lined up and made sense to me. Accardo did an excellent job with showing the demon's penchant for destruction without making me shake my head or want to throw up. There was a darkness from Jax and the demon that hung over every interaction that ramped up the intensity.


Though the romance was great, it sometimes caused the rest of the story to take a backseat. I would've liked to have seen a little less romance and some more action thrown in.


These two are beyond spicy and want each other something fierce. Whether they are a good fit remains to be seen. I will say that Sam has a soft spot for Jax and doesn't feel like he's all bad where Jax wants to keep Sam safe, especially from himself. There's a lot of conflict to work out before this relationship will work, but I hope we see something good come out of it.

This is the second book by Accardo that I've read and I've enjoyed them both. The characters in Ruined drew me in and I was very interested in the story concept and world. I like the flare of romance and the flashes of darkness that hung over everything, and I'm looking forward to seeing more out of this series. Recommended.

I knew that look. Horror and disgust mixed with fear. It was the expression everyone in this damn town wore when staring me down. Just another reason to get this shit over and done with and leave this place in the dust forever. I was like a plague to these people. The Antichrist and hitler rolled into one horrible package.

"Stalking me? Really?" As if I didn't have enough of that crap going on already He shrugged and held the door open wide. "We were talking. I figured we could walk and talk." "We weren't talking, Jax. You were talking - I'm convinced it's because you love the sound of your own voice. I was trying to walk away."

I might have been able to use my cell as a flashlight, but that was gone, too. Probably at the bottom of the river with the fish. It made calling for a ride impossible. That left no other choice but to walk. Through the woods. At night. After being pushed from a cliff to my death. I was having a really shitty week.
Posted by JezzebellJC at 12:00 AM