Silverthorn (An Echoes of Eternity Novel) by Sydney Bristow 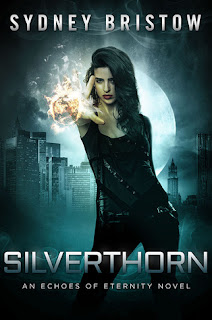 Serena Sykes will need to gain control of her latest supernatural ability now that Darius Coyne, the last remaining master vampire will stop at nothing to kill her, so he can rule the world beside the love of his life, the ancient sorceress, Zephora.

And if they don’t destroy Serena, the tight-knit group of friends who fight alongside her might do it for them. Her tortured romantic relationship with Nolan, who takes away more from Serena than just pleasure each time they touch, may be more inclined to help Darius than he’s letting on. And her identical twin sister, Alexis, and her niece, Celestina, take turns playing both willing ally and potential enemy.

In a race against time, Serena must vanquish the enemies that attack her at every turn and fight to keep her friends alive, sane, and on good terms, while also trying to locate the mythic Book of Souls…if she hopes to defeat the ultimate power couple.

I’d have to settle for killing the person responsible for dashing what I’d hoped would have turned into a long and distinguished career: Darius Coyne. Nothing would stop me from ending his life the way he had ended my dreams.

Serena and her band are back for round two. One of the best parts of this story is the band for sure. While the characters deal with Zephora trying to rule the world, you still get to see them live their lives and attempt to achieve their dreams. That helps bring the story to life for me. This one also felt like a bring the group together and make sure they are ready for the war in the books to come. The book also contains some pretty decent sarcasm and if you've read my reviews before you know I like my sarcasm.

Most stories have the supernaturals either out and known by the public (not this one) or trying to keep themselves under the radar. In this one vampires keep attacking in public but there isn't any fallout from it yet. I get a lot of people will just see it as a hoax but there are plenty of wack jobs who are just dying to prove something like this. I'm hoping in book 3 we'll see a change in how people act in general as more creatures pull stunts in public.

Serena and nolan are still into each other but if he touches her, Her natural life decreases and brings her closer to death. Brandon and Kendall are still playing the I like but refuse to tell you as I could get hurt so I will rag on your life choices game. Though something big does impact their relationship.

So far I really enjoy the series. The characters are fun, they fill real and relateable for the most part. The action is good and plentiful. The romance is there but doesn't control the story which is a big plus for me. Overall it's a great start to a witches/demon/vampire tale and i look forward to the next book.


“That rocked my face!” said Brandon, tapping a new pair of drumsticks against the cinder block walls while our band walked down a hall backstage. “You burnt those vamps like you tossed a pizza into an oven.”
“That would be a very unappetizing pizza,” Kendall said, cringing with such horror she’d closed her eyes.


“All of this because you love a woman who died centuries ago?” I asked. “Loyalty like that is touching… if you didn’t love such a psychopath.”
“What would you know of romance or lifelong commitment and dedication? You’re barely old enough to drink a pint of—”
“Blood? Sorry. Not interested. I prefer water. It keeps my skin soft. And it’s way better for my complexion, so…”


“Well,” I said, unsure what to think of this unexpected development. “Let’s see what’s what.” I got out of the car, popped the trunk, and removed the Soul Sword from its case.
Nolan met me a moment later. “You plan on chopping off his head… in a church?”
“You think God would disapprove?”
“No, I think he’d cheer you on.”