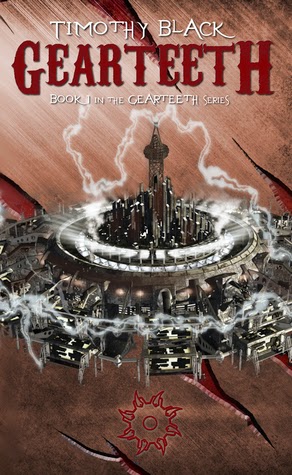 “In 1890, a disease that turned sane men into ravenous werewolves swept through the United States like wildfire. On the brink of humanity’s extinction, Nikola Tesla and a mysterious order of scientists known as the Tellurians revealed a bold plan: the uninfected would abandon the Earth’s surface by rising up in floating salvation cities, iron and steel metropolises that carried tens of thousands of refugees above the savage apocalypse. The remnants of mankind huddled fearfully in the clouds, waiting for the werewolves to devour each other.

Yet, twenty years later, only one salvation city remains aloft, while the beasts still rule the world below. Time has taken its toll on the miraculous machinery of the city, and soon the last of the survivors will plummet to their doom. But when Elijah Kelly, a brakeman aboard the largest of the city’s Thunder Trains, is infected by the werewolf virus, he discovers a secret world of lies and horrific experiments that hide the disturbing truth about the Tellurians.

When the beast in his blood surges forth, Elijah must choose between the lives of those he loves, and the city that is humanity’s last hope of survival.”

I flipped the dog-eared paperback's cover over. Street and Smith, c. 1890, New York.

"Poor bastards," I sighed. "Twenty years gone... did you end up in the bellies of the werewolves when the world went to hell, or wearing the fur yourselves?"


For starters, I love that there are two main factions those who followed Nikola Tesla and those who followed Thomas Edison. The werewolves having almost complete control of the land makes for an interesting dilemma. The flying city’s and needing to power them through the electrical storms seems just crazy enough to work. Our protagonist, Eli, has had it pretty rough but still has a heart of gold for the most part. His gran may be one of my favorite elder characters ever.


Gearteeth did get a little slow at times as Eli tried to learn what he could about the werewolves. Which turns into you reading about him reading. While the info he got was good for the storyline, it made it drag a bit. But you do need to set the world up where people can see what’s going on.

The romance is minimal for the most part. Eli does meet someone later in the book and even his Gran gets her juices going.


I really enjoyed Gearteeth for a first book in a series. I'm looking forward to seeing what happens next to Eli and his friends. Some of the werewolves and mutant wolves were interesting in the first book as well as some of the advanced technology they had developed. It seems as if the next book has even crazier experiments in store for poor Eli. If you like werewolves, and enjoy steampunk in general, you'll want to give this one a read.

"Sons of bitches," I breathed, amazed and angered. I'd known the prophets were arrogant, with a big old heaping of secretive and callousness toward their fellow man, but just a few of the random entries I flicked through in the book convinced me of the magnitude of their crime. They'd kept vital information to themselves and left the rest of us wandering in the dark, easy meat for the beasts.

"Shut up," I said, keeping the werewolf's crimson gaze locked on mine. I could see her muscles tensing, and she paused in her pacing, teeth bared. The furback had just about had enough of my taunts.
"Tell Maude I'm sorry for making her worry so much; tell the old biddy I love her. Tell her... the hell with it, she knows. Take care of her for me, will you?"
"Goodbye, Henry."