Review: A Twist of Fae (Surfaeillance #1) by Rebekah Shafer 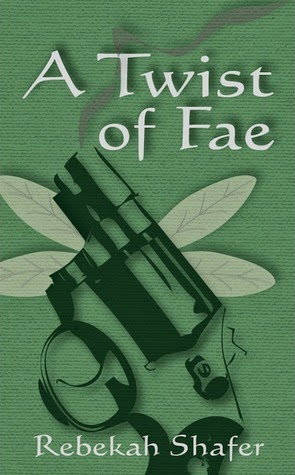 “My crystal was vibrating harder than ever now. More fae were moving in. I glanced over my shoulder at the dark gardens. This can’t be good. The crystal was designed to register the presence of faery matter, besides serving as identification and other mundane uses, but after the years I’d spent wearing one around my neck, I was becoming more and more convinced it picked up on danger, too.”

In special agent Burgundy Graves’ opinion, desk work is for sissies. So what if Surfaeillance Agency exists to regulate faery activity on Earth? Tracking the monsters is a form of regulating. Give her a gun, a dangerous threat to hunt down, no questions asked, and she’s in.

But when Surfaeillance puts her in a team of wet-behind-the-ears investigators and tasks them with trailing a clueless millionaire, Burgundy begins to seriously consider pulling out—until the millionaire is murdered on her watch.

With the agency at risk, and shape-shifting ogres on the loose, Burgundy races to unmask her enemies before she becomes the next victim in this deadly, faery-tainted plot.

Buy A Twist of Fae by Rebekah Shafer Today at Amazon

"It's something other than flattering to be forgotten by so many fae, but I have a sneaking suspicion that they do it intentionally. Rather like forgetting that you have an uncle in the mafia. I don't see what their problem is. After all, the Earth-Faery relationship was their idea in the first place."


Special agent Burgundy Graves is one of my favorite types of heroes. She hates being out of the action and has an attitude that keep you entertained throughout the book. She also prefers to work alone as others just hold her back in her mind. She does end up with a couple of odd partners but odd is the only partner she would be able to work with efficiently. Plus, A Twist of Fae has plenty of supernaturals to keep her busy.


I wish the book had been a tad longer. I felt like I got through it way too fast. I also would have liked more time in Fairyland. The little bit of time spent there in the book was more of a teaser than anything else.

Burgundy didn't really have any time for romance in this book, but to be honest I was ok with that. Maybe in the next book.


A Twist of Fae was a fun read even if it did seem to be over before I was ready. The good news is there will be a second book and I'm looking forward to what trouble finds her next. And it does seem like she will spend a lot more time in fairyland with the next installment.

"You'll feel better when the adrenalin wears off," I said, glancing around at the few stunted trees. They looked like shadows in the dark. "If we get out of here, I'll buy you some ice cream." If there was one thing pixies had a weakness for, it was frozen dairy products.

Bentley has been described as many things during his employment, but the simplest way to imagine him is to pretend an anteater and a bat got married, and their child was turned into a dwarf by an irritable wizard. He stood there on his scrawny little legs, no taller than my knee, bristly brown arms folded, batwings crossed -- even his long nose looked like it had a kink in it.

A tall, dark, and handsome shadow loomed up beside me. "All quiet so far? Stewart Landis asked, leaning an elbow against the bar behind me.
Coworkers. I waved a hand at the crowded press of humanity. "Sickeningly so. I haven't been this keyed up since Fairy Invasion of '98, when a single fairy burst into the office and demanded a ransom of two donuts." I glanced at him to make sure the sarcasm wasn't being lost. "And I do believe I'm out of ginger ale. Again. Where were you?"

Buy A Twist of Fae by Rebekah Shafer Today at Amazon