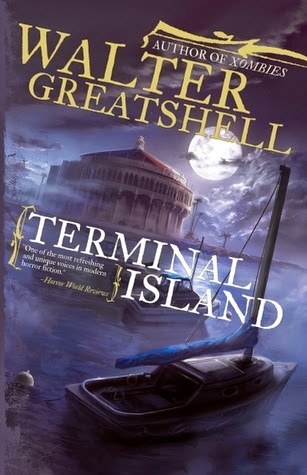 As a child, Henry Cadmus lived on Catalina Island, a scenic vacationland off the Southern California coast. But Henry's experiences were far from idyllic. Today, even though Henry has seen firsthand the horrors of war, the ghastly images that haunt his dreams are ones he associates with his childhood… and the island: a snarling pig-man holding a cleaver; a jackal-headed woman on a high balcony, dripping blood; strange occult rituals… and worse. If it was up to Henry, he would avoid the island entirely.

But Henry is returning to Catalina Island. At his wife Ruby’s insistence, Henry, Ruby, and their infant daughter are coming to Avalon, so that Henry can face his fears, exorcise his demons, and reconcile with the one he dreads most… his mother.

Henry Cadmus grew up on the beautiful Catalina Islands.   His childhood memories are haunting and chilling.   As a young boy he and his mom Vicki escape the weird and strange happenings on the island.  Henry vowed to never step foot on the island again.  Years later and after a very strained and distant relationship with his mother, he gets an odd letter stating she has moved back to the island.  Soon all correspondence stops.  Henry brings his wife and young daughter to find out some answers to this mystery.  Once he steps foot on the island, he has strange flashbacks of earlier days.   Things become more and more strange, sinister, and twisted the closer he gets to the truth.

A Tropical Paradise……  ahhhh so relaxing

Anyone that loves horror and mystery, will find this book is very much intriguing.  It is different and probably one of the most unique stories I have ever read.  If you think your family has lots of quirks and secrets, I guarantee you it has nothing on Henry’s family.   I really enjoyed the fact that when the book started out you couldn’t really tell if it was a true horror or just a great mystery.   Since both genres are my favorite, this made Terminal Island and the plot very interesting to me.   The deeper Henry delves into his mom’s disappearance, you are never really sure what is going on.   Could it be shady people or could it be something “unnatural”?     Even though you only see Vicki in flashbacks throughout the book, you get wrapped up in trying to figure out what the heck happened to her.   The book goes back and forth from the present to Henry’s childhood.   So I was constantly trying to figure out how it all connected.  I love a book that can try to get my thoughts and creative mystery juices flowing.

Paradise Ain’t all it’s cracked up to be

The book had me HOOKED until we got closer to the end.   Then I wasn’t really sure if the author was on acid through the last half, or if I was having a bad trip and I don’t do drugs!!!!!  I am not saying the ending was horrible, but it was very trippy.  I kinda started losing my interest because it was out there and too much.  There was this STRANGE confusing stage play that was meant to explain the background and history of the main plot twist.   All it managed to do is make my head spin from all the strangeness.  The book was so well written and plot started out beautifully strong just to have it end up where it did.  Have you ever listened to the lyrics of some Beatles songs?  (I am the Walrus -  I am talking about you)  That’s kinda the trippy direction the book took.

All in all, I really enjoyed reading Terminal Island.   It was a fun twisty-turny of a story that went a totally unexpected direction.   The plot is very well put together and is done in a way that makes you try to put pieces of the puzzle together.   You can’t quite put your finger on what is going on.   Henry and his wife Ruby sometimes make questionable decisions, it is easy to root for them and want to help them figure out what is happening with all the new condo developments and disappearing people.  The end was a slight mushroom high trip, but it is all tied together very well.   Everything does make sense by the time it is all over.   My final thought:  great little horror/mystery with an unexpected twist.

Posted by JezzebellJC at 9:23 AM