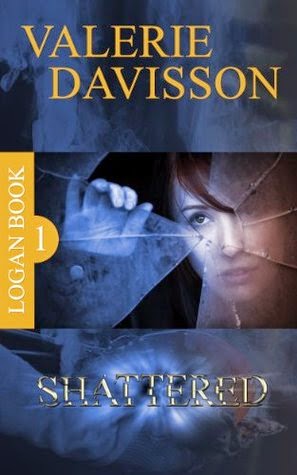 In SHATTERED, the first book in the original mystery series and stunning fiction debut with which Valerie Davisson lets us crave for more, Logan McKenna loses her husband, her illusions, the company they built together, her music, and now, probably her job. But that won’t stop her from digging into a murder investigation that keeps Southern California’s tight-knit artist community on its toes and law enforcement cluelessly guessing.
At loose ends, and running out of money after buying a fixer upper on the coast, she decides to help out her best friend from high school, Thomas, a Native American artist, and his wife Lisa at their booth at the Otter Arts Festival, in the idyllic coastal town of Jasper, where she and her police-officer brother Rick grew up. When one of the talented, young artists is found gruesomely murdered at the festival, Logan is faced with the reality that her best friend not only lied to her, but may be guilty of murder. It’s up to her to find out what really happened that night, before the murderer kills again.

Shattered is the story of Logan McKenna. After a tragic car accident that killed her husband and turned her life upside down, she is trying to restart her life. Her new life has several bumps in the road. Once she thinks things are starting to come together, one of her best friends is accused of murder. Everything, all evidence, points to him. She is on a mission to clear her friend's name and find real justice for the victim.

River Otter Festivals Who Knew They Were Fun

This is the debut book of the Logan McKenna story.   I must say overall, I really enjoyed it.  It could be a very promising series.   It is full of fun, interesting, different, and entertaining characters.  The supportive cast in this book is dynamic.  The book did have a slower pace; however, it was a good, interesting slow.   I love a good murder mystery.  I didn't guess the murderer in Shattered which is always refreshing.   Out of all the characters though, I think Iona (who was a fairly minor character) was my favorite.   I like the spitfire, no-nonsense attitude.  Tave’a the café owner is a pretty amazing mysterious character to me also, and she made me wish I had a cinnamon roll.  I would work out and read about her delicious baked treats.  My tummy would tell me I worked out...let’s eat sweets!!!  I would love to see more of them and see their characters expanded in future books.

That Moment When the Thrill is Gone

When I started reading the book, I was really excited.  It started with lots of promise and I was so engrossed in what was going to unfold.  However, it fell kind of flat.   The editing ruined the flow of things.   I liked Logan, but I do hope that her character grows stronger in the following books.  In Shattered, I am not sure if she was a strong enough lead.  Being a first book in a series though, that may not be a fair judgment since this may be on purpose to show her beginnings into a stronger character.   However, in many scenes and chapters I was more captivated by the supporting characters.   The storyline was solid but it had a rushed feel and it felt like some of it was just blown through.   I had a hard time caring about a lot of it.   Some of that could have been the editing though.

All in all, it’s a decent read and could turn out to be a very interesting series.   The killer is not easy to spot, and Logan stays hot on the trail of the murderer.  There is good and bad in the book, but as the first book it has a lot of potential to be a very good series.   I would love to see more depth and growth in all the characters.  Shattered was easy to read and did have you wondering how it was going to unfold.   This book made me realize anyone can be crazy :)