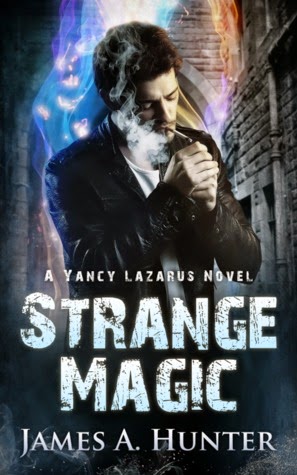 Yancy Lazarus is having a bad day: there’s a bullet lodged in his butt cheek, his face looks like the site of a demolition derby, and he’s been saran-wrapped to a banquet table. He never should have answered the phone. Stupid bleeding heart—helping others in his circles is a good way to get dead.

Just ask the gang members ripped to pieces by some kind of demonic nightmare in LA. As a favor to a friend, Yancy agrees to take a little looksee into the massacre and boom, he’s stuck in a turf war between two rival gangs, which both think he’s pinch-hitting for the other side. Oh, and there’s also a secretive ass-hat with some mean ol’ magical chops and a small army of hyena-faced, body- snatching baddies. It might be time to seriously reconsider some of his life choices.

Yancy is a bluesman, a rambler, a gambler, but not much more. Sure, he can do a little magic—maybe even more than just a little magic—but he knows enough to keep his head down and stay clear of freaky-deaky hoodoo like this business in LA. Somehow though, he’s been set up to take a real bad fall—the kind of very permanent fall that leaves a guy with a toe tag. Unless, of course, he can find out who is responsible for the gangland murders, make peace in the midst of the gang feud, and take out said magical ass-hat before he hexes Yancy into an early retirement. Easy right? Stupid. Bleeding. Heart.

Buy Strange Magic by James A Hunter Today at Amazon

I looked around at the crowded bar, Surveying the rough splattering of men and women who would be injured, maybe killed, if I let something go down in here. That wasn't something I wanted. I'm not a perfect human -- I drink, smoke, and gamble in amounts a few might consider excessive. I may not be the most positive role model for your kids, but I don't like folks getting hurt either.


Yancy Lazarus is my type of protagonist, he fights for what he considers to be right but he doesn't do it in a lawful good type of way. He uses magic, which I really enjoyed how magic worked in this book and he has a magically enhance handgun that takes no prisoners. I loved that the creatures he fought were new for me and not the same old supernatural monster you normally read about. I also love the way Hunter sets the world up in a way for more books involving more interesting creatures while still referencing familiar ones. I really like that dimension travel is an option in this series.


I would have liked to know more about his family. He left them when he got his powers thinking it would be safer for them but all I can think about is are his powers genetic? Do any of his kids or even grand kids have his gifts? And if so, maybe he should be trying to teach them instead of just taking a powder.

No real romance though he does mention a family he had to leave behind. Could make for a interesting prequel.


I really enjoyed Strange Magic overall. It's full of action, has plenty of new monster/demons to be introduced to and the universe it takes place in seems to have tons of potential. I love the Hub and the Bar being run by a Red Dragon. I read it in one afternoon as I couldn't put it down. Definitely recommend this one.

Also, this is not the first time someone has tried to shoot me in the head. Surprising, I know, considering my overwhelming tack and agreeable personality.


Not only was my assailant almost physically unstoppable, supernaturally resistant to the Vis, and military trained -- It was an honest-to-goodness ninja. A Ninja. In what world is that fair or okay? If you ever have to say that you've been assaulted by a supernatural, man-eating, hyena-ninja, it is a sure sign that your life has gone terribly, terribly wrong somewhere.


Generally though, for most things -- leprechauns, low fae, or other dark denizens -- the hub is the revolving door in and out. One big bus station. Like any bus station, you might well get rolled if you fall asleep there and it smells a little like urine.

Buy Strange Magic by James A Hunter Today at Amazon