Book Review: Shatter Me (Shatter Me #1) by Tahereh Mafi 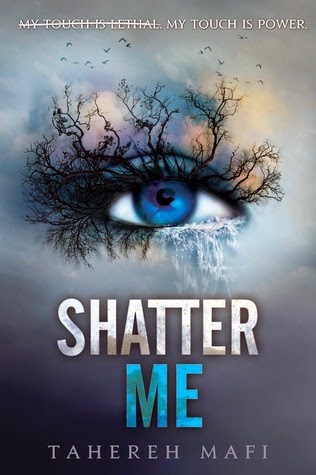 The last time she did, it was an accident, but The Reestablishment locked her up for murder. No one knows why Juliette’s touch is fatal. As long as she doesn’t hurt anyone else, no one really cares. The world is too busy crumbling to pieces to pay attention to a 17-year-old girl. Diseases are destroying the population, food is hard to find, birds don’t fly anymore, and the clouds are the wrong color.

The Reestablishment said their way was the only way to fix things, so they threw Juliette in a cell. Now so many people are dead that the survivors are whispering war – and The Reestablishment has changed its mind. Maybe Juliette is more than a tortured soul stuffed into a poisonous body. Maybe she’s exactly what they need right now.

Juliette has to make a choice: Be a weapon. Or be a warrior.

I spent my life folded between the pages of books.


This felt like more than just reading a book or enjoying a story. It was totally delving into the mind of a character that embodies a phoenix.


The story starts out in the mind of Juliette, a girl left devastated. A girl that's mentally imbalanced, left in solitary for years, and is just waiting for the end. Her erratic thoughts are so precisely conveyed in the writing, that I clearly saw her pain and her vulnerability.

I truly love books that have you imagining in such a crystallized way what life would be like in their shoes. Each of Juliette's revelations had me picturing what I would be like in the same situations. I have to say that I would be much more broken and much less likely to ever trust someone. I can see her inner strength so well just knowing that fact. Juliette is automatically a character that I wanted to root for.

Then there is how everything is revealed. It's a nice build-up to each little piece so that by the end I genuinely felt as if I'd learned a lot about the people and the world they live in. I felt a balanced amount of a story about a girl, romance, and action. The writing was so well done. In the beginning, it was all chaotic inner dialogue and by the end Juliette's thoughts had straightened out so much that by each chapter she was seemingly growing stronger and saner just through the writing.

The side characters are all great as well. Adam Kent that shows up on the scene and sparks the meat in the story, was fleshed out well. I got to see moments from his childhood through to now. His brother James is exactly what you think a ten year old growing up on his own would act like with bravado and "but I wanna". He was truly looking for some parental nurturing, which he found with his big brother. Kenji was the funny sidekick supplying bite and quips.

It was actually hard for me to imagine Juliette being scared of Warner simply because of who she is. She has nothing to lose, she has a power that should be able to keep her safe, so why this intense fear? The hatred I could get, but not what I almost considered to be an irrational fear.

Also, I thought that I had received an unedited copy of this book when I first started reading. I wanted to break about my red pen and add oxford commas so badly. Then, I got it, and it all made sense so suddenly becoming beautiful.

There is a great romance in this one between Adam and Juliette. It happens a little too 'easily' for me, but I get it because there is a past and an understanding between the two. She already deeply loves him and I don't remember him saying it back even though he sure acts like he loves her as well. Though the fact that he hasn't said it back (at least that I remember) sure gives me pause.

An incredibly well-written book that draws you into the subconscious of a delicate yet strong girl, Shatter Me delivers a good mixture of intrigue, love, and sense of self. Very recommended.

In the absence of human relationships I formed bonds with paper characters. I lived love and loss through stories threaded in history; I experienced adolescence by association. My world is one interwoven web of words, stringing limb to limb, bone to sinew, thoughts and images all together. I am a being comprised of letters, a character created by sentences, a figment of imagination formed through fiction.

All I ever wanted was to reach out and touch another human being not just with my hands but with my heart.


The moon is a loyal companion.
It never leaves. It’s always there, watching, steadfast, knowing us in our light and dark moments, changing forever just as we do. Every day it’s a different version of itself. Sometimes weak and wan, sometimes strong and full of light. The moon understands what it means to be human.
Uncertain. Alone. Cratered by imperfections.


I always wonder about raindrops.
I wonder about how they're always falling down, tripping over their own feet, breaking their legs and forgetting their parachutes as they tumble right out of the sky toward an uncertain end. It's like someone is emptying their pockets over the earth and doesn't seem to care where the contents fall, doesn't seem to care that the raindrops burst when they hit the ground, that they shatter when they fall to the floor, that people curse the days the drops dare to tap on their doors.
I am a raindrop.
My parents emptied their pockets of me and left me to evaporate on a concrete slab.