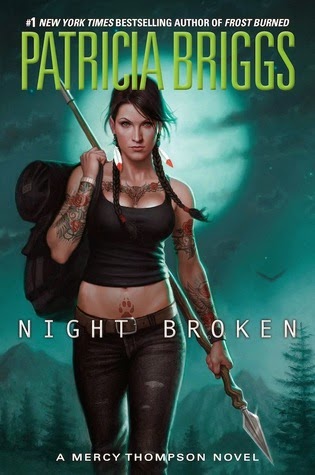 An unexpected phone call heralds a new challenge for Mercy. Her mate Adam’s ex-wife is in trouble, on the run from her new boyfriend. Adam isn’t the kind of man to turn away a person in need—and Mercy knows it. But with Christy holed up in Adam’s house, Mercy can’t shake the feeling that something about the situation isn’t right.

Soon, her suspicions are confirmed when she learns that Christy has the farthest thing from good intentions. She wants Adam back and she’s willing to do whatever it takes to make it happen, including turning Adam’s pack against Mercy.

Mercy isn’t about to step down without a fight, but there’s a more dangerous threat circling. Christy’s ex is more than a bad man—in fact, he may not be human at all. As the bodies start piling up, Mercy must put her personal troubles aside to face a creature with the power to tear her whole world apart.


One of my all-time favorites series. For me, the Mercy Thompson series is one that hasn't gotten boring even with the large number of books.


One thing this series has going for it is memorable characters. Ones I love, and those that I love to hate. Mercy is one of those tough leading-ladies that hasn't changed even with all the things she has been through, good and bad. She has shown growth, which is always necessary in a character, but she has remained Mercy through and through. She is a character that is not as intimidating as those that surround her, but with a quiet sleeper strength that cannot be underestimated. She always puts other's needs before her own so I can't help but root for this 'underdog' to come through. I say underdog lightly because she has a fierce inner-strength even while being vulnerable and weaker than her foes. Really, she manages to beat her adversaries with wit and her ability to make good friends.

The ex-wife coming to the scene won't be loved by all, but I found that I enjoyed it. As the readers of this series will know, not all of the pack has accepted Mercy as a part of it. As a matter of fact, there are those that resent her and would love nothing more than to push her out. With Christy there, those that dislike Mercy had a 'side' to rally on. Since most of them knew Christy, there were some like Mary-Jo and Aurielle that were good friends with her. They have never liked Mercy so this was an interesting dynamic. My favorite part of Christy being there though is that the book never once slows down. If it's not the bigger problems that Mercy has to deal with, it's Christy trying to make a move on Adam and turning some in the pack against her. Mercy doesn't get a break through the entirety of Night Broken.

I loved how Honey came closer to Mercy in this one. Honey has always done what her Alpha wanted so she's helped Mercy and stood beside her before, but I don't think she ever respected Mercy. It feels like she grew to respect and even admire her in this one.

The big bad was fantastic. Juan Flores is nothing like Mercy has faced before. I love that Briggs is still able to pull out the crazy messes for Mercy to face because sometimes it feels like she has seen it all before. The way it is written, it is always believable that Mercy could find herself up against these complex foes because she is constantly surrounded by so many people that she cares about. She would never back down from helping someone out.

It's so short. It feels like the whole thing is over before you know it.

That was the ending? Everything is resolved by the end so there's no huge cliff-hanger (although there is a statement that makes it questionable what's coming), but there is so much build-up through the whole thing, and it felt like it was over in 2.5 seconds. I was so amazed at how quickly everything happened at the end that I took off a whole star for what was otherwise a 5-star read.

*SIGH* Adam and Mercy. This is one of my favorite pairings. I think one reason that Christy being there didn't bother me is because nothing is going to separate these two unless it's death or some magic that makes them go crazy. Christy is not nearly strong enough for all that. They are amazingly communicative with each other, deeply in love, and support each other to the ends of the Earth. Really, it's a great relationship. I love that them being together hasn't made the story boring at all, but actually more fun for me to read.

I couldn't put it down. Night Broken has action from start to finish, wonderful characters, a great baddie, and a romance that's extraordinary. Absolutely recommended.

Adam snorted as he pulled on a faded green t-shirt that said “I Heart Coyotes.” Yet another sign that folding my clean clothes wasn’t too big a price to pay to make him happy. He didn’t have any “I Heart Christy ” shirts–or I would have burned them already.

“No, really," I said. "Now that we know that Flores is really this nasty, fiery, superpowerful nothing-can-kill-me demon from hell, maybe we should consider just giving Christy to him?

Love means leaving yourself vulnerable, knowing that there is someone to catch you when you fall.

Death isn't a tragedy to God, only to those left behind.

“I know that, too,” he said, his voice tender. “You should know that you can’t hide things from me.”