Review: Pride and Prejudice and Zombies by Seth Grahme-Smith 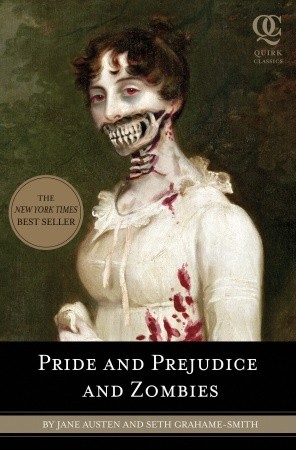 Goodreads Summary
“It is a truth universally acknowledged that a zombie in possession of brains must be in want of more brains.”

So begins Pride and Prejudice and Zombies, an expanded edition of the beloved Jane Austen novel featuring all-new scenes of bone-crunching zombie mayhem. As our story opens, a mysterious plague has fallen upon the quiet English village of Meryton—-and the dead are returning to life! Feisty heroine Elizabeth Bennet is determined to wipe out the zombie menace, but she’s soon distracted by the arrival of the haughty and arrogant Mr. Darcy. What ensues is a delightful comedy of manners with plenty of civilized sparring between the two young lovers-—and even more violent sparring on the blood-soaked battlefield. Can Elizabeth vanquish the spawn of Satan? And overcome the social prejudices of the class-conscious landed gentry? Complete with romance, heartbreak, swordfights, cannibalism, and thousands of rotting corpses, Pride and Prejudice and Zombies transforms a masterpiece of world literature into something you’d actually want to read

So Pride and Prejudice is actually the only classic novel that I enjoy. It's also the only book that doesn't have any kind of magical aspect, no supernatural creatures, and no fantasy that I fell in love with. What  makes it even more strange is that I started with the movie starring Kiera Knightley after becoming a fan of hers from Pirates of the Caribbean. I generally don't watch what I consider 'girly movies'. Don't get me wrong, I enjoy a good Rom-Com every now and then, but a truly girly movie has never been my thing. However, I will watch Pride and Prejudice over and over again, and can guarantee you that I know majority of the lines by heart. Something about this story grabbed a hold of me and just won't let go. So this month is zombie month for my Paranormal Challenge and I thought I'd give this classic story with the added benefit of zombies a go.

I got to read the story that I love again and hear about Elizabeth with her hang-ups on thinking that Mr. Darcy is stuck up and too prideful and how Mr. Darcy is slowly and gradually beginning to see more in Elizabeth than a woman who is lower than him with a family that is disgraceful. Truly, I will never get enough of this story over and over again.

There were some really funny moments thrown in with the addition of zombies and ninjas, katanas and daggers. The girls are trained in the arts to fight zombies and Catherine De Bourgh has ninjas at her disposal. Some funny 'asides' were in there about how people should be stabbed and beheaded and Elizabeth lifting her skirt despite decorum to dispatch zombies was just comical. Mr. Wickam getting a little more karma dealt to him than he did in the original was nice to read as well, though I actually would have enjoyed seeing that go a little further. Why couldn't he have been turned into a zombie? I would've liked that.

Really, the writing is not that great other than the original Austen parts. This isn't a true book, it's a funny rendition of it that has zombies included. Take that as you will. If you LOVE Austen and would hate to see her work touched, you would definitely not enjoy this. If you LOVE Austen and want to hear the story again with crazy twists thrown in, then you can give it a go. Sadly, the characters did begin to lose a bit of themselves due to the extras because their main focus had turned into killing, and more killing and who are the better zombie killers. They stopped being true to form after a while since, of course, Austen's characters weren't prioritized with this. So while this was a funny novelty at first, I will warn that it begins to wear off except for some truly bigger moments after the first 3 chapters or so.

Some of the romance scenes were changed to include physical altercations and after professing feelings for each other the pair had the opportunity to fight side-by-side at the end.

I'm glad that I read this, but I wouldn't read it a second time. It certainly had funny moments and was a neat twist on a story that I love, but I think I would have preferred more of a re-telling than this parody if truth be told.

"Certainly, my dear; but as to not meeting with many people in this neighborhood, I believe there are few neighborhoods larger. I know we dine with four-and-twenty families. Well, three-and-twenty, I suppose - God rest poor Mrs. Long's soul."

"You write uncommonly fast."
"And you prattle uncommonly much."
"How many letters you must have occasion to write in the course of a year! Letters of business, too! How odious I should think them!"
"And how odious indeed that I should so often suffer to write them in your company."
"Pray tell your sister that I long to see her."
"I have already told her so once, by your desire."
"How can you contrive to write so even?"
He was silent.
"Tell your sister I am delighted to hear her improvement on the harp; and pray let her know that I am quite in raptures with her beautiful little design for a table."
"Miss Bingley, the groans of a hundred unmentionables would be more pleasing to my ears than one more word from your mouth. Were you not otherwise agreeable, I should be forced to remove your tongue with my saber."

"Mrs. Collins, you must send one of my ninjas with them. You know I always speak my mind, and I cannot bear the idea of two young women travelling by themselves. It is highly improper in times such as these. You must contrive to send somebody. Young women should always be properly guarded and attended, unless they are that rare sort of lady, like myself, who has been trained by the most respected masters in Japan - and not by those appalling Chinese peasants."