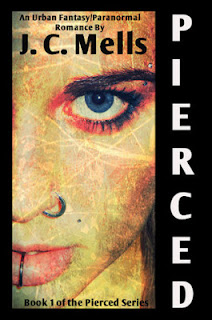 I've never posted a DNF before, but I saw on Blkosiner's Book Blog, Brandi did a tasteful post about why she didn't necessarily like a book, but others did and felt like I could do something similar to it...so here goes.

Just because I DNF'd a book doesn't necessarily mean that the writing was bad or that someone else wouldn't enjoy it. I'd like to let everyone know why I stopped so that you can make your own mind up.

This particular book I stopped at 63% through. In the beginning, I thought that I would really enjoy the character of Pierce. She remembers every single little detail of a memory, and it's very interesting. It started well, but quickly went into a slow-moving 'telling' session about who she is and why she is the way she is. I still easily worked through this part and felt it was probably necessary in the character building so I continued on with the story. When I made it to the action and meeting new characters about 30% of the way through, I was more excited because I felt like more would be coming, and I did get introduced to some unique new characters.

However, what really made me stop wasn't the writing or the characters, it was the subject matter. This was why the book wasn't for me. I don't want to get too spoilery so I will just say that a cursing 10 year-old, raw and tragic nightmares and flashbacks, frequent drug-use and mentions of sexual assault just hit a little too hard for me to continue with. This just wasn't a read for me. Plus, with all the mentions of food because she does really like to cook, and I'll be flat honest, I really don't - I had a hard time connecting with her on a positive level that I wanted to.

I do want to point out that on Goodreads currently there are 9 five-star reviews, 5 four-star reviews, and 1 three-star review for a total of a 4.53 rating right now. To have no reviews under 3 stars at the moment, and for me to be the only DNF is pretty significant. I don't have any personal friend reviews to share at the moment though.

If you have read it or know someone else that has, what are your thoughts on Pierced? If you haven't read it yet, do you think it will still be a book that you will enjoy?