Review - The Universe Builders: Bernie and the Lost Girl by Steve LeBel 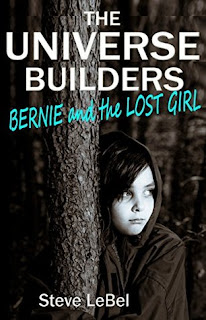 This is the prequel to the award-winning fantasy The Universe Builders: Bernie and the Putty that won 16 awards for excellence.

All of God Town is in an uproar. A child has been lost. The Town mobilizes, and an exhaustive search is carried out, but as the day wears on, the fear grows that little Emily may be lost forever.

Despite growing evidence, the gods continue to resist the idea little Emily has wandered into the woods, a place feared by even the gods themselves.

Yet, a young god named Bernie isn't afraid, and with the help of his friends, Suzie and Lenny, they embark on a rescue so daring no god would ever consider it. They will search the woods, and, if necessary, they will even search the deadly area beyond The Town known as the Unknown Territory.

It's a fascinating tale of a most unusual hero on a courageous quest.

Buy The Universe Builders: Bernie and the Lost Girl by Steve LeBel today at Amazon

In their world, there is no death. The gods live forever. That is unless something tragic happened. The gods are not immortal. They can be hurt — even killed. So, if they want to live forever, they have to be very careful. That meant avoiding any unnecessary risks. And the one thing all gods agreed on was this: the safety of their world ended at the edge of their town, where the woods begin.

For me I loved being able to see how Bernie,Lenny and Suzie first gelled as a small group of friends. Getting to see how they view each other and treat each other despite their parents views was entertaining. Seeing these all powerful gods cower at the ideal of leaving town was an enjoyable twist. It's interesting to me that with all the technology and animals they bring back to their world they still refuse to bring anything to help them explore their own world.

I don't have any real complaints.

No real romance with the main character as of yet. This story was mostly young godlings.

If you enjoyed The Universe Builders: Bernie and the Putty you will enjoy getting to know Bernie and his friends even more and find out how they ended up friends. The perfect little story to lead into the next book in the series. I can't wait to read more about Bernie and friends.

This isn’t the woods anymore. We’re in the Unknown Territory. Bernie felt a chill. For millennia, young gods everywhere were taught to fear this place. Yet the three of them had cast aside the wisdom of the gods. Are we crazy?

So transfixed by the horror of the first beast, the boys would not have noticed the second one. Larger than the first, its deep growls told of its anger. It wouldn’t allow the young gods to come between them and the prey they’d been stalking.

Buy The Universe Builders: Bernie and the Lost Girl by Steve LeBel today at Amazon