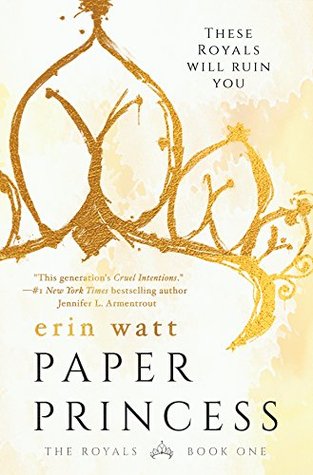 From strip clubs and truck stops to southern coast mansions and prep schools, one girl tries to stay true to herself.

These Royals will ruin you…

Ella Harper is a survivor—a pragmatic optimist. She’s spent her whole life moving from town to town with her flighty mother, struggling to make ends meet and believing that someday she’ll climb out of the gutter. After her mother’s death, Ella is truly alone.

Until Callum Royal appears, plucking Ella out of poverty and tossing her into his posh mansion among his five sons who all hate her. Each Royal boy is more magnetic than the last, but none as captivating as Reed Royal, the boy who is determined to send her back to the slums she came from.

Reed doesn’t want her. He says she doesn’t belong with the Royals.

Wealth. Excess. Deception. It’s like nothing Ella has ever experienced, and if she’s going to survive her time in the Royal palace, she’ll need to learn to issue her own Royal decrees.

I did immediately click on this one because of the gorgeous cover and the title only to find out that there are no actual Royals in this book, that's a family's last name. So while I did initially want a fantasy kingdom type of read, I couldn't pass up what the blurb says. This generation's Cruel Intentions? Yes, please. I have a guilty pleasure of watching spoiled, rich kids with morality issues. It's weird, I know...but I watched every season of Gossip Girl.


Paper Princess started out pretty strongly. Ella is living on her own with three jobs while she's still a high school student. One of those jobs is being a stripper. She is whisked away, not happily, by a new 'guardian' that appeared out of nowhere and that she had never met before. See, pretty interesting.

It gets even more interesting when we are introduced to the other characters that play a large role in the story. We have Callum who is her new guardian (honestly not the best parent though he is kind) and his sons...all five of them. They range in personalities from the Douche Canoe leader that everyone follows to the guy that will sleep with anyone with a pulse. Paper Princess does fall on the drama heavy line so it's best to read when you're in the mood to watch a Soap Opera. Who doesn't love watching a good train wreck? I whispered 'ass' under my breath so many times at the shenanigans that the Royal brothers get up to that it started sounding like I was humming a song.

Ella doesn't want anything to do with these guys who quite honestly are rude, obnoxious, and spoiled. However, through the course of the book, different circumstances, and good writing, she becomes a part of this family and deeply cares for every one of them.


Although it had a strong beginning, and Ella was built to be an amazing character, I felt that the end was a downhill slope landing in a horrible cut-off ending. See below for 'Questions About the Book' and you'll see that the authors' answer there is indeed a massive cliffhanger. It wasn't just the cliffhanger that is the issue though as I've read plenty of books that end in the way that makes you want to claw your book apart hoping the next one magically appears. It was the way Ella seemed to be shrinking instead of growing as a character by the end. I really hope in the next one that she gets her lady balls back. Also there is a character in a circumstance that I find hard to swallow.


Ella makes the mistake of falling for one of the Royal brothers. She fights it hard and for quite a while, but eventually succumbs. He did some truly awful things to her in the early stages of them meeting, but did wind up being a pretty decent guy. Until that ending. There better be a dang good explanation for how things went down.

Paper Princess was very dramatic and entertaining. It was like watching a train wreck. If you are addicted to reality shows or shows like Gossip Girl then you should find it entertaining as well. However, the ending knocks everything back a step. I'll be reading reviews of the next book before continuing with the series based on how this one ended.

QUESTIONS ABOUT THE BOOK

We recommend this for young adult readers, age 17 and up. We think it’s a book that will appeal to older teens and those adults who are in touch with their inner teen, like us.

We promise that we didn’t set out to write a cliffhanger, but Paper Princess does end in one. The good news is that the next book is up for pre-sale and it will be released July 25, 2016.

Erin Watt is the brainchild of two bestselling authors linked together through their love of great books and an addiction to writing. They share one creative imagination. Their greatest love (after their families and pets, of course)? Coming up with fun--and sometimes crazy--ideas. Their greatest fear? Breaking up. You can contact them at their shared inbox: authorerinwatt@gmail.com

“Gritty, angsty, steamy, and rife with scandal and secrecy, Paper Princess is the kind of book you hope EVERY book will be when you open it. The kind you can't put down, can't forget about. This book consumed me and thanks to that crazy ending, I won't be moving on from this book for a good long while.” Jessica from Angie & Jessica’s Dreamy Reads