Review: Angelfall (Penryn & the End of Days #1) by Susan Ee 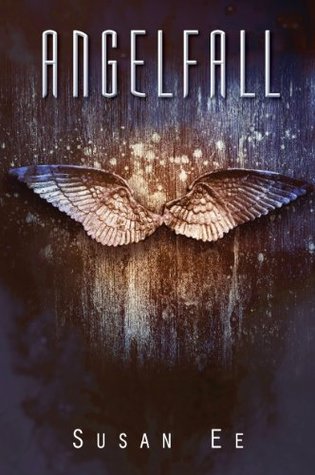 It's been six weeks since angels of the apocalypse descended to demolish the modern world. Street gangs rule the day while fear and superstition rule the night. When warrior angels fly away with a helpless little girl, her seventeen-year-old sister Penryn will do anything to get her back.

Anything, including making a deal with an enemy angel.

Raffe is a warrior who lies broken and wingless on the street. After eons of fighting his own battles, he finds himself being rescued from a desperate situation by a half-starved teenage girl.

Traveling through a dark and twisted Northern California, they have only each other to rely on for survival. Together, they journey toward the angels' stronghold in San Francisco where she'll risk everything to rescue her sister and he'll put himself at the mercy of his greatest enemies for the chance to be made whole again.

I never thought about it before, but I'm proud to be human. We're ever so flawed. We're frail, confused, violent, and we struggle with so many issues. But all in all, I'm proud to be a Daughter of Man.

I've had this one on my shelf for quite some time. The first few angel type books I read were good but not phenomenal so I wasn't in a hurry to pick it up. I've read some really great angel books this year though so I decided to give this one a go.


So while this one may be an "angel" book, it's about angels as the means to the end of the world and woven inside is a creepy and gritty dystopian. Our heroine, Penryn has a ton to deal with. It starts with her schizophrenic mom and wheel-chair bound sister, but gets worse and worse for her as the story progresses. She handles each new obstacle like a champ though. I'm drawn to Penryn because she's 5'2" like me. Unlike me, she's a 17 year old. She will just not give up and I love her spunk. She saves, kidnaps, then blackmails Raffe, an angel, to help her get her sister who was taken by angels back. Their time on the page together is a lot of fun. They both have a dry humor and I giggled a lot while reading.

The world is very desolate. They are eating cat food to survive. More than even the homeless and wanderer living conditions, is that every move is dogged by enemies. They have to keep safe from human gangs, angels, and what they name as the low demons. There is not a boring moment through Angelfall. It feels as if her life is in different degrees of danger throughout the story.

I have to throw a special mention to Dee and Dum who are reminiscent of The Weasley Twins, but can turn into super spy ninja killers the next moment. Besides Penryn and Raffe, they are my favorite characters in the story.


I have no complaints.


Penryn and Raffe are so different yet very similar so it's really fun to watch them together and see who will get the last word. There's not really romance to speak of in this one. It's more a getting to know each other and decide whether to trust each other read. I look forward to see where it goes from here as any romance between the two is strictly forbidden.

This is far more than just an angel book or just a dystopian as it's a mixture of paranormal elements, horror, and dystopian all in one. The story flows well and there isn't a break in the action or adventure. The characters are easy to latch onto and the elements and world introduced are unique and interesting. Angelfall was an excellent read.

When you're small enough to have to look up at everyone around you, there's no such thing as a dirty fight.

"What's your name?" asks the leader. There is something intimate about the way he asks me this question as he is about to feed me. "My friends call me Wrath," says Raffe. "My enemies call me Please Have Mercy. What's your name, soldier boy?"

But the thing that really convinces me that the apocalypse is here is the crunching of smartphones under my feet. Nothing short of the end of the world would get our eco-conscious techies to toss their latest gadgets onto the street.
Posted by JezzebellJC at 12:00 AM