Review: FROM AWAY - Series One, Book One: A Serial Thriller of Arcane and Eldritch Horror by Deke Mackey Jr. 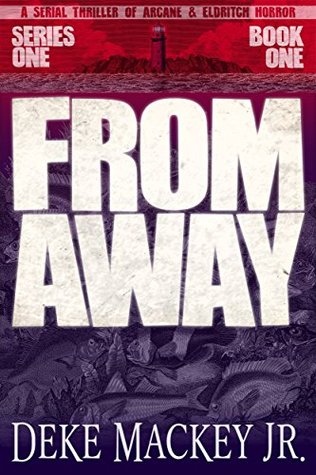 Something lurks in the black waters surrounding Mossley Island. An arcane and eldritch horror. For fifty years, it's waited. Fading into myth. Allowing those who fought off its last invasion to succumb to age. Now, with the island all but unprotected, this ancient evil prepares to mount one last attack.

The first chilling installment of this serialized story finds Dawn Lesguettes accompanying her father to the island. Though he is reluctant to return to his birthplace, Dawn has always wanted to learn more about her origins and hopes to reconnect with the family her wayward father abandoned before she was born.

But Mossley Island is not welcoming to those from away, and investigating her unusual family background will soon lead Dawn to uncover chilling secrets best left buried, even as her arrival heralds the return of a darkness long thought vanquished.

Featuring creepy nuns with mysterious motives, a sinister cabal of strangely robust senior citizens, and a militia of lighthouse keepers watching the ocean in case unspeakable terrors rise from the depths, this eerie seven-part serial will draw readers in with atmospheric tension and surprising twists, and refuse to let go as it hurtles towards a startling cliffhanger conclusion sure to leave everyone desperate for the next gripping chapter.

Buy FROM AWAY - Series One, Book One: A Serial Thriller of Arcane and Eldritch Horror today at Amazon

Only when the lighthouse door has closed do those watching dare to move. Back from the rocky shore, in a nearby thicket of fir trees, they stir. Turn away from the lighthouse without a word to one another. Head off through the dripping foliage.   The last of them hangs back a moment. Drops a useless hunk of metal to the ground before following the others into the darkness of the woods. A padlock.

This one was interesting, secret societies, mysterious creatures, and an Isolated Island. We get two main characters in Aaron a 3rd generation member of the circle. His biggest worry is how much he screws up at his circle duties and his mom pretty much being his boss. The other main focus is Dawn. She’s going to the island for the first time to research her family history. Her dad claims to not recall any of it and is no help. Besides those two the author did really well fleshing out the supporting cast and creating questions I wanted to have answers to.

My only real issue is the book ended and I still had little feel for the threat the circle feared. The book does end with a pretty large cliffhanger but I’m pretty use to those so no big deal.

There isn’t any romance worth bringing up at this point in the series. The ground work is there but nothing solid.

Overall I enjoyed book one and will look into book 2. Some of the characters were fun and it grabbed my interest enough that I want to know more. If you enjoy a horror book that doesn’t introduce the threat in chapter one then you’ll enjoy this one.

“But, Dad... After all this time with Mom... You must know what she--”
“Doesn’t matter what I know. Not to you. You treat me like anyone else outside the Circle. Meaning: You keep your lip zipped. Circle business stays inside the Circle. I’m outside. Always.”


“If somebody told you two hundred ladies in clown suits were waiting outside your door, planning to attack you with custard cream pies... Would you be afraid to leave your house? Or would you call bullshit? Wouldn’t bullshit just be like, your default position? Until you’ve seen at least one lady-clown in the vicinity?”


Only once in motion does the old man speak. With customary grace and delicacy, as befitting an elderly grandfather: “So. Ya really shit the fockin’ bed last night, didn’tcha, cocky?”
It was going to be a long day.

Buy FROM AWAY - Series One, Book One: A Serial Thriller of Arcane and Eldritch Horror today at Amazon