Review: Releasing the Demons (The Order of the Senary #1) by L.D. Rose 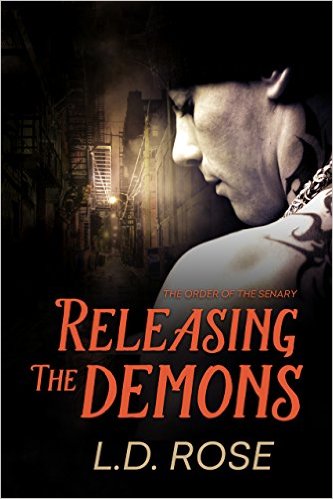 Blaze Knight has been through hell and back, but the nightmares aren't over yet.

Five years after Blaze was maimed by Cyrus Chimola, a powerful vampire with a penchant for torture, he’s still trying to pick up the pieces of his shattered life. As a genetically engineered mercenary with the ability to bend fire to his will and to see in infrared, Blaze’s mission is to protect what’s left of humanity. When Chimola and his crew return to the Bronx gunning for Blaze’s blood, Blaze is forced to face the demons of his past. Hell-bent on revenge, he seeks the help of Valerie Medeiros, an NYPD detective who manages to steal his heart and save his life in more ways than one.

Motivated by her sister’s gruesome death, Valerie has made it her life’s goal to bury every vampire in the ground where they belong. When she brings in Blaze Knight for suspected murder, she discovers he’s not only innocent, he isn't a man at all—he's a half-vampire hybrid working with a band of brothers for the U.S. military. Valerie has a hard time trusting anything with fangs, yet she quickly falls headlong into Blaze’s life, a life full of darkness and horror she can’t even begin to fathom. The bodies are stacking up, but Valerie can’t seem to let go of this hybrid, a beautiful monster filled with pain, rage, and passion unlike anything she's ever known.

In a world where the line between good and evil is blurred, Blaze and Valerie will find danger at every turn, risking everything they’ve come to know and love, including one another.

Buy Releasing the Demons (The Order of the Senary #1) by L.D. Rose today at Amazon

Blaze nearly laughed out loud, the urge bubbling up inside him for the first time in days. Dax had a few screws loose, but hell, didn’t they all?

For starters I love the ideal of the Hybrids having different traits along with drawbacks to using them. The ideal of the world going on lockdown as Vampires are discovered also rings true in my eyes. Blaze and his personality fit really well when you learn the things he has gone through. The vampires, while sadistic, were individual enough that they didn't all blur into a blob of evil. They were developed well enough that the story didn't feel bogged down at all. Valerie was also worthy of co-hero in the book. For a human, she could kick some serious tail and yet still feel believable.

If I was to call anything Bad, I guess it would be me wanting to know more on the hybrids and how their group was funded. But it's a small detail that I'm sure will come out in the next book. Along with getting to know more about some of the other hybrids and the gifts.

While Blaze and Valerie don't exactly fall in love at first sight, you do see them becoming attracted to each other. It might have been a bit fast but it makes the story work.

Overall I enjoyed the pace and the developement of the characters. There is plenty of action to keep you interested, plus a bit of horizontal dancing to keep things interesting. I liked the state of the world and appreciated that it was one villain to focus on but a sire and his brood. Why dislike one villain when you can hate multiples? If you like vampire novels, I would recommend giving this a shot for sure.

She set the paper down, the headline reading, ‘Is Batman truly in Gotham?’ with a blurred image of a dark figure running down an alley. The image was terrible, low resolution and dimly backlit by the sick yellow glow of the streetlights. It could’ve been anyone, really. It could’ve been a victim running from a vampire.


Kat mentioned the genetic pattern looked abnormal from those she typically saw. She doesn’t think it’s human, but she’s not positive it’s vampire either.”
“Well, it’s either one or the other. Unless there’s some other monster out there we don’t know about.”
Valerie shuddered at the mere thought. One brand of monster was bad enough.


Light dawned in those pretty eyes as they widened. “You’re blind.”
His lips curved but he felt black inside. “No. I just don’t see like you do.”
“How so?” she asked, her interest piqued as she straightened. “Don’t tell me you have x-ray vision or something crazy like that.”
“Infrared. I see in infrared.”


“It’s only going to get uglier,” he warned. Though her touch quelled the churning well of rage inside him— for now— it still burned hot enough to remind him of the mess they were in. No, not mess. Mess wasn’t the word. More like a fucking catastrophe.

Buy Releasing the Demons (The Order of the Senary #1) by L.D. Rose today at Amazon