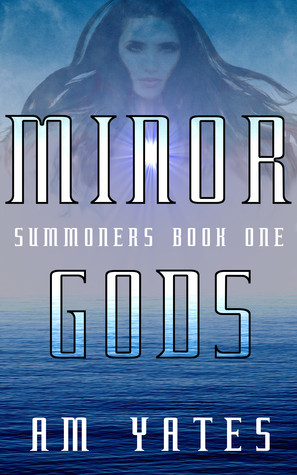 In the secret tribes of the Core, humans walk a tenuous line, using ancient masks to channel the gods and their elemental powers.

But the delicate balance between gods and man is fractured when someone resurrects the forbidden mask of a ruthless Earth Goddess and begins a war. Her goal . . . reclaim the natural world from human civilization. Her first victim . . . Josie Day’s mother.

After witnessing her mother's murder, seventeen-year-old Josie wants nothing more than to seek justice. Instead, she’s forced to return to the tribe she left as a child and expected to act like a normal teenager. Still, the unknown face behind the goddess's mask haunts her. And it isn’t the only one.

Josie knows how to deal with gods. But when the masks come off, the humans behind them may be more than she can handle.

It’s all the same ceremonial rigmarole until a pissed off earth goddess busts in with a few minor gods and a cadre of phantasmal TemperMentals. Then everybody’s screaming and running for their lives.

Now this one felt really fresh and unique for me. I love the fact that the available powers to use in this are almost endless. So many gods of different power levels to base masks off. Josie is a fireball of sarcasam. She doesn't back down at all when she thinks she is pretty much powerless. She still gets in anyone's face that tries to hold her back or contradict her. Her sister though is nothing like her for the most part. She's a bit more pampered and high strung. Plus there is a great support cast of characters that I want to know more about.

The only thing that bugged me was I have no clue how strong their tribe is. All the problems that pop up seem to be dealt with by the younger generation despite the most powerful mask wearer having been their leader. Without her, their tribe seems pretty weak to be honest. Hopefully in book two we'll get to see a bit of the older mask wearers and what they are capable of doing.

There is plenty of teen romance, open relationships and even some triangle drama.

Overall I can't wait to read book two in the series. The powers and how they are manifested drew me in, The characters are likeable, while the villain is easy to dislike without knowing who they really are. The action is fun and plentiful even if it comes about because they put them selves out there because being safe is boring. They are teenagers after all. If you enjoy unique sci-fi/paranormal, I'm sure you'll enjoy this one.

“I don’t need to be introduced,”
“No one is allowed inside.”
“Yeah, but—” Beech started.
Josie cut in. “Well, then why don’t you trot on in to your masters, Fido, and tell them that I’m here. Good boy.”


The weirdest thing was happening; her skin was growing warm. Was she actually blushing? She couldn’t remember the last time that had happened. She straightened her face.
“I’m going to be honest. I’m pretty inept with all this . . . personal interaction stuff, so . . . are you flirting with me?”
“Uh, yeah.”


“You think it’s my fault your sister doesn’t listen to you? Maybe you should try listening to her first. You still act like you’re the Triune. You storm in and boss everybody around. You expect them to do what you say. But they won’t, because you’re not.” He stood up, coffee mug in hand. “If you want people to listen to you, you should try being nicer.”
“Good idea,” she said. “Would you please go to hell?”


The wars had mostly been about territory and personal slights—people in the Core knew how to hold a grudge, for generations. The violence bloomed and died back and bloomed again like weeds. Factions formed alliances and then betrayed them, feeding into the hostilities. No doubt fights would break out, they probably already were. Without a strong Triune to stamp them down and maintain order, some of the tribes would seize the opportunity to take care of business they felt was unfinished.


“He’s got a point,” Kai said. “You practically ordered the Eye to do a body cavity search on us when the mask went missing. Then the thief shows up and you let him get away without a pat down?”