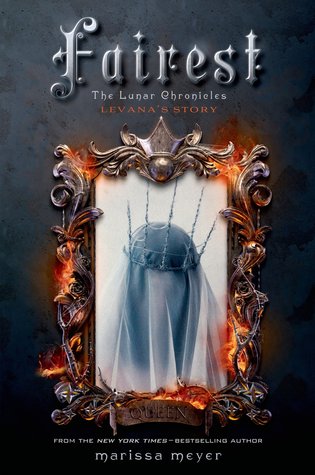 In this stunning bridge book between Cress and Winter in the bestselling Lunar Chronicles, Queen Levana’s story is finally told.

Mirror, mirror on the wall,
Who is the fairest of them all?

Fans of the Lunar Chronicles know Queen Levana as a ruler who uses her “glamour” to gain power. But long before she crossed paths with Cinder, Scarlet, and Cress, Levana lived a very different story – a story that has never been told . . . until now.

Marissa Meyer spins yet another unforgettable tale about love and war, deceit and death. This extraordinary book includes full-color art and an excerpt from Winter, the next book in the Lunar Chronicles series.

The rumors were bad enough. Whispers that the young princess was not at all beautiful, had in fact been grotesquely disfigured by some tragic accident in her childhood.


This one is a companion story about one of my favorite villains ever written. Queen Levana in The Lunar Chronicles is certifiably insane and wickedly powerful. I greatly enjoyed a look at her youth and the revelation that her whole family is nutballs. What I wish though is that we would have seen her even younger than she first appeared. She's on the verge of 16 in the beginning of this one and there are some flashbacks to younger days which help clear the picture of how she became the way she is. However, when this opens, she is already got a lot of loose screws. She makes one horrible choice after another and quite frankly has large obsession issues.

I really liked getting to see hints and scenes with other characters throughout (Dr. Erland, Cinder, Jacin, Winter). The setting is entirely on Luna also which was a great treat and it was fantastic getting to learn more about their world in general. I loved getting to see how the Lunar army of hybrids and the letumosis virus came into being. I do recommend reading this in between Cress and Winter. It was very enjoyable though I do wish it would've shown more of why cruelty just came so naturally to this royal family.

Levana turned back to the receiving line. Another mourner, another well-wisher, another liar. Lies, all lies.

I will win when I go into Lunar history as the most desirable queen to ever walk these hallways.