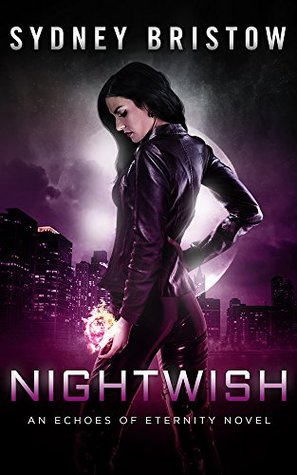 Serena Sykes just discovered that the mother, identical twin sister, and niece she never knew existed…are the last remaining witches on the planet. That is, except for Serena, who recently received her own limited, albeit wildly erratic supernatural abilities.

But her newfound family isn’t interested in helping her master those gifts. After all, Serena’s mother has been communicating beyond the veil with the first witch in their line, a sorceress named Zephora who hopes to return to this dimension and destroy an ancient curse that would unleash paranormal creatures across the globe.

To help guide her in this new landscape, Serena turns to her grandmother, an elderly woman suffering from dementia and the only vampire in existence, a man who has his own mysterious agenda. With less than 48 hours to prevent her family from triggering a supernatural wasteland, Serena must learn to control her abilities…if she hopes to save the world!

“Well, you kinda just threw my world into a tailspin, so I think I’m entitled a few minutes to freak out.”

He glanced at the time on the dashboard. “Okay. Three minutes starting… now!”

For starters Serena is witty and sarcastic. Her use of sarcasm to roll with the punches had me smiling through most of the story. Then the vampire Darius (who for some odd reason I picture as Spike from Buffy) seems to have an attitude problem. His personality fits for me as he wants to be taken seriously and expects people to respect his experience.  Some of the magic and how it's governed feels fun and fresh, while a few of the non humans that pop up give me hope for where the series is headed.

My only real issue so far is how easily everyone just accepts the paranormal world. I get that it's all around us on TV and in books but dang. She tells people she's a witch and no one bats an eye.

Lets start with Serena's friends Kendall and Brandon. She loves him and he's clueless to the fact. So she seems to constantly runs him down whenever another woman comes up. Then Serena ends up having strong chemistry with a Nolan Hart. but while he seems to be interested in her they are in a band together. So they do what they can to keep each other off limits.

I'm really glad I gave this one a chance. I like the magical history, the creatures and the personalities that have been shown so far. I also really have hopes for her sister Alexis to turn it around and not be such a turd in the punch bowl. This one is definitely worth reading if you enjoy paranormal stories with fun little twists.

“Interesting,” he said. “I threaten you with a death, and you… jest?”
“Well, no, because if I jested… I’d be a jester, now wouldn’t I? And I’m not much for the bizarre shoes, the funky hat, and the freaky make-up. It’s all pretty disturbing.”


“I’m not a full-fledged vampire. I just have vampiric tendencies.”
“Is that like psychotic tendencies? Some days you just have to go out and kill a person or two. And others, you’d rather just stay in and, what, watch Downton Abbey?”


“That depends on the witch. And the power she wields.”
“So if I had super-strength, and you tried to bite me, I’d be able to rip your head off.”
“You’re quite violent, aren’t you?”


“Stay away from her and Alexis, but practice your abilities— once you discover them.”
“How do I do that? Hop on a broom and fly over to Hogwarts for a one-on-one with Hermione?” She gave me an impatient look. “Sorry. How do I protect myself?” A grave expression appeared on her face.
“By killing them before they kill you!”


“Zephora’s granddaughter distorted the human form. She created many life-forms that most humans regard as folklore.”
“Like Bigfoot?” Brandon asked. “Is he real? And don’t say he’s Chewbacca from Star Wars.”
Darius examined him for a long moment. “You are a strange man.”