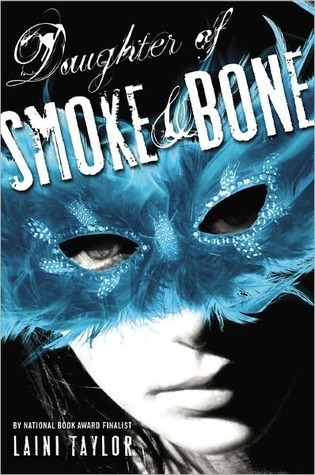 Around the world, black handprints are appearing on doorways, scorched there by winged strangers who have crept through a slit in the sky.

In a dark and dusty shop, a devil’s supply of human teeth grows dangerously low.

And in the tangled lanes of Prague, a young art student is about to be caught up in a brutal otherwordly war.

Meet Karou. She fills her sketchbooks with monsters that may or may not be real, she’s prone to disappearing on mysterious "errands", she speaks many languages - not all of them human - and her bright blue hair actually grows out of her head that color. Who is she? That is the question that haunts her, and she’s about to find out.

When beautiful, haunted Akiva fixes fiery eyes on her in an alley in Marrakesh, the result is blood and starlight, secrets unveiled, and a star-crossed love whose roots drink deep of a violent past. But will Karou live to regret learning the truth about herself?

It seemed like just another Monday, innocent but for its essential Mondayness, not to mention its Januaryness.


I had just read an epic book that left me with a book-hangover and was seeking out a new one that could match its greatness in order to move on. This one had been on my to-read list for quite some time and it did not disappoint.

Light to Fill the Darkness


The writing is the first thing I noticed. The descriptions are unique and beautiful though definitely not overly wordy. I've always loved stories about angels, in this case Seraphim, but part of what sets this one apart are the Chimeara. There are a lot of angel stories, but I assure you that this one is a complete original. In this series, the Chimeara are creatures of all kinds blended together with some human element. There is also a great back story and so many things that I haven't seen before like the collection of teeth and the dispense of wishes as coins.

The characters are a lot of fun. Karou is a human student that was raised by Chimeara and has no knowledge of where she came from. While she goes to art school during the day, she travels the world for her Chimeara guardian, Brimstone, by night running his errands in the collection of teeth. She constantly has to lie about her home life and job. I felt for her immediately. Her human best friend, Zuzana, is a tiny ball of fire (though not literally) and her Chimeara family are easy to love.


The Tears of the Moon


I wish there wasn't an insta-love to tarnish such a beautiful story, but it was explained away in an acceptable and fitting manner and overall ended up increasing the depth of the story.

Akiva meets Karou and is drawn to her. She feels like her emptiness is filled when he is near. They are enemies from birth due to Akiva's war with her Chimeara family so they have a definite Romeo and Juliet feel of star-crossed lovers. I can only hope it doesn't end in the same tragic way for them.


To the Top of the Cathedral

Such a great start to the series! The back story and elements of the world are explained well and are not only unique but deeply interesting. The characters are full and loveable all with their individual priorities and personalities. The writing flows smoothly and the imagery is poetic. Definitely recommended.

Zuzana arched an eyebrow. She was a master of the eyebrow arch, and Karou envied her for it.

And Brimstone, of course - he was the star of the sketchbooks. Here he was shown with Kishmish perched on the curl of one of his great ram's horns. In the fantastical stories Karou told in her sketchbooks, Brimstone dealt in wishes. Sometimes she called him the Wishmonger; other times, simply "the grump."

His answer had neither confirmed nor denied her fear.
"Your life? You mean, your body? Your body is nothing but an envelope, Karou. Your soul is another matter, and it is not, as far as I know, in any immediate danger."
"An envelope?" She didn't like to think of her body as an envelope - something others might be able to open up and rifle through, remove things from like so many clipped coupons.
Posted by JezzebellJC at 12:00 AM