Review: In The Seraphim City by Eirik Moe Dahll-Larssøn 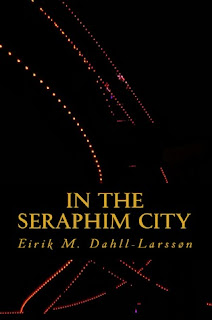 For centuries, the city grew. Aided by the Alchemists, it grew past any boundary, until its lower levels could no longer sustain life. It grew until its foundation fell, its core became decrepit, and it grew until it reached the sky. Only the Alchemists remain, shunned and hated, in the bowels of this monstrosity; in the rotted centre of the city called the Hive. Up above live the rest. On the Surface, and on the grand island floating in the sky, the Plateau. Few still fight for the rights of those forgotten - for the Alchemists who helped the city climb so high. They are left to rot at the city's feet. None seem to care, or even remember that they are still there, waiting to be let free. To smell the open air, and to see the sky again. None but Ian Allant. A man whose life was spent attempting to bridge the gap between the people above and those left below - and to bring light to the darkest corners of the city. Theodore Donovan is tasked with finding the people responsible for his death. He descends into the endless night below, and finds that there is more to the truth than he bargained for - and that Ian Allant's murder is perhaps better left unsolved.

“This is everything I have,” he said. He hesitated. When he spoke again, his voice was much lower, much darker than it had been. “You are not likely to come back from this,” he said.

“What’s that supposed to mean?”

“It means,” Ed said, still holding onto the folder, “That I suspect you are looking to pull a thread holding together a wound very frailly stitched. And once that wound opens, it will not easily close.”

So the main character Theodore Donovan makes for a great PI. He's resourceful and good at asking the right questions. He hates using a gun and unlike most of the people, he is willing to go down into the hive for information. I enjoyed the world development of Seraphim city and some of the different characters. The alchemist and their abilities really stood out to me. I love different...and for me this fit.

I also really liked all the twists and turns the story held.

For me, I like action, the more the merrier to be honest. In this one, it felt like the action was minimal and far between. Though it did pick up towards the end. I guess if you like the slow build toward the action it won't bother you.

Theo still works with his ex-wife. They are both willing to do what ever it takes to help the other, they're just no longer together. You can definitely tell they still love each other in my opinion.

Overall, I enjoyed reading this one. If there is a 2nd book, I'll be ready to give it a read as well. I definitely have questions I need answered after this one. While the book doesn't end on a cliffhanger, it also doesn't really end. It felt like I got a 'tune in next time for what happens' next message. But if you enjoy Crime/thriller stories or Sci-Fi, you should give this one a read, it's worth it.

‘What is down there?’ I heard myself ask, feeling the Nothing before us, around us, above us, bearing down on me like a predator, like the Minotaur, waiting for its prey to stumble.
Abiel answered my question. ‘More of the same,’ he said, in that monotone, dark voice that seemed to refuse to echo like my own voice did. ‘Cold, dark and ruin, and hunters in the night.’

“So what’s this for?” Janine asked, looking over the list.
“Defence,” Theo said tersely, still scrolling down his phone list with a look of disdain on his face.
“From what?”
He looked up, shrugged, and sighed. “Whatever we might need defending from.”

Kenneth shot him a furtive look, frowning at the vague answer. “You being careful?” he asked.
“Always.”
“No, I mean careful,” Kenneth said, patting the gun in his back pocket. “Yeah?”
“I don’t like guns, Ken,” Theo said, “You know I don’t.”
“They might like you though, you give’em a chance.”

“Solheim Suny wants to see you,” he said quietly, menace in his voice. His cronies readied their guns; training them on him. Theo smiled.
“Good,” he said happily, “I want to see him, too.”
The Alchemist blinked. “What?” he asked flatly.