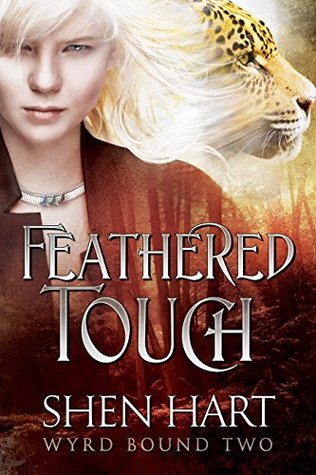 Deep in the ancient forests, a strange cult led by angels is slaughtering innocent humans. The Wyrd Sisters send their troubleshooter Thalia and her pack into the forest to stop them. Thalia thinks this will be a welcome distraction from problems with her pack and with her ever-more-tangled love life … but there’s more going on than she knows. The leader of the cult has an ambitious goal: To kill the gods. All the gods.

Thalia finds herself torn between her past and a possible new future. Does she chase her centuries-old dream of freedom, or stand by the Sisters – and pay the ultimate price?

I shrugged. "Let everything descend into chaos and see what happens. Who knows, it could be a better, happier existence."


So having read book one I was extremely excited to hear Thalia and the pack was back. Don't worry if you've never heard of this series, Feathered Touch does a pretty good job standing on its own. One of the things I like the most is that the shifter pack considers the head male and female as Alphas with things being equal for the most part between them. It was interesting to read how they could turn an ordinary gun into a weapon capable of killing the supernatural. Also getting to see Ark the elf do more than just healing had me cheering. Plus, I love that this series has different supernatural creatures instead of the run of the mill vampire/werewolf/zombie book. Not that I hate those by any means, but I'm all for new monsters and beings expanding my universe.

Now the bad for me is Alex. He's a bit of a bitch way too often and while I get his position and why it's written like that, I feel like I really need to see the Alpha side of Alex that Thalia once loved. Hopefully in book 3 he'll man up, because right now I'm not rooting for him in the triangle.


That’s right I said triangle, as in a love triangle. Though Thalia, Alex and Lee at least make it interesting. While I don't want to ruin anything, be prepared for anything to happen.


Overall it's a fantastic read with different supernaturals running about, elemental magic and even some magical weapons. Toss in the Wyrd sisters being mega bitches and a love triangle with a twist and I would recommend Feathered Touch to anyone that enjoys shifter books set in modern times. Or if you're just looking for something new, you won't be sorry for trying the Wyrd Bound series out.

"The leader of this cult, he intends on killing the gods?" Alex asked.
"He does."
I pursed my lips and smirked at her. "It sounds like he has the right plan to me.

He took a step closer to us and spat, "And you're supposed to be alphas, yet here we are."
I snarled at him, "I never fucking wanted you in any pack of mine, now get the fuck out of my sight before I rip your balls off."

The original Sister, the bitchy spokesperson in the middle, glared at me before she said, "I see you haven't trained them in respect."
I grinned. "They respect those who have earned it."