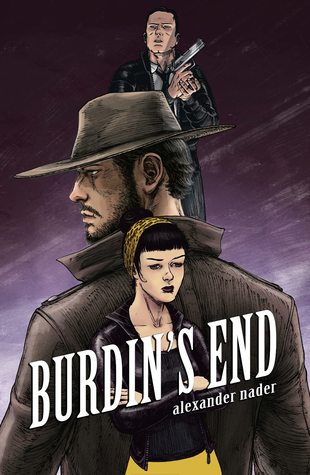 In the final installment of the Beasts of Burdin trilogy Ty has found himself roped into working for the Agency, a top secret organization with the sole purpose of eliminating all demon activity, yet again. Demon hunting is a full time job, but luckily

Ty has managed to work his way down to a ‘consulting’ position in the Agency after a few disagreements and a couple dead superiors.
Ty’s part-time position becomes far more hands on as the demon activity in his region cranks up to eleven. Demons are crawling out of peoples’ minds and into the real world at an alarming rate and it’s up to Ty, once again, to step in and save the day. First step: get over last night’s hangover.

On one side of the kid are two Tengus. They are kind of like the lizard-man, but dogs instead of reptiles. They are mean and protective as a mother lion surrounded by flaming hyenas. On his other side is an imp— the   demon equivalent of a sea monkey— and an ultra-rare Karasu-Tengu, also known as a crow-tengu. Also known as damn I wish I had some backup.


This is 3rd book in the Beasts of Burdin series. Even though this is the 3rd story, I was able to follow along fine without having read the first 2. Even as a stand-alone read, this was a terrific detective style book with the added element of demons. In this world, demons are manifested when a person focuses on a thought to the point the demon actually appears in the real world. Our hero Ty Burdin comes from a long line of demon hunters. But not just any line, he's a Burdin. They tend to live twice as long as other demon hunters. He still works for the agency, but only to keep Nora his rockabilly secretary safe. You see, she's an oracle and that means she's no better than a demon to the agency, but if he plays ball, they tend to ignore her.

I would have liked a little more build up in his brother's relationship with Eugenie the palm reader. You don't even know they've met until they are already together. At that point it's like ok and this went down how? Not that it's a huge stretch for them to be together, but being the major secondary
character Hartnet is, seeing it happen could have been nice.

The romance is fun in this one. Not only does Ty's brother end up dating Eugenie who neither Ty or Nora like, but Ty and Nora have sexual tension galore between them. The 4 of them going on a double date makes for an interesting night.

Well if you like detective style reads like Tomorrow Wendell or the Hellequin Chronicles, then you'll enjoy Ty Burdin. When I finished Burdin's End, I went right to Amazon and bought books 1 and 2 so I could see what I had missed out on. The demon concept is fantastic as is most of the character development.

I put the pedal to the floor, leaving a cloud of dirt and a couple damn confused lake-goers in my rearview. If there is a god, of any form,
Hartnet has already taken care of whatever the hell he was going after and this is all over. Jesus, Allah, Buddha, Spaghetti Monster, amen.

I pull out the office bottle and take a drink. It’s going to be one of those days. I’ll be lucky if I make it out alive. “So you were hoping
to catch the couple shitting in your yard?”
“What?” The smile is gone now and his hands have floated up to the armrests. He grips the chair with the quiet fury of someone who can’t get
a soda bottle open. “Their dogs, I planned on photographing their dogs.”
“So you’re the kind of guy that likes to take pictures of dogs in incriminating positions. That sounds like a thrilling hobby.
I hope that works out for you.” I grab a cigarette and light it.

This fire demon shit is getting super old. Why can’t anyone dream up a nice ice fairy, just once? Or maybe a cotton candy demon? That would
be a welcome change from all this doom and gloom bullshit demonry. Urobach opens up for another dragon loogie. With a quick dive and roll,
I clear the flames. Good for me this thing’s got crap for distance. I’ve seen people spit watermelon seeds farther than that; not that I’m complaining.

This is the kind of person to manifest an Urobach. The technical term is pyromaniac. Most men have used the term to describe themselves, or a friend,
at some point in their adolescence. Honestly, what thirteen year old boy isn’t down for a bonfire or a bottle rocket war? I can’t think of a single
one. Those aren’t true pyromaniac’s, though. That’s just dudes blowing shit up. True pyros get a special kind of satisfaction from the flames.
Not only do they like burning things— fields, buildings, animals, people, whatever— they also get off on burning themselves. True pyros are a rare
breed of fucked up, and I’m staring at one.

“Hey, bossman, if this is a service call, can Diaz handle it?” The kid is cocky enough, I’m surprised he doesn’t jump on everything out there.
It’s like he’s trying to make a name for himself or something.
Helstrom sighs the sigh of a housewife asking her husband to get his off the couch and take the trash out. “Diaz is busy. He’s taking care of a
succubus out in West Hills right now.”
“Another succubus? That’s like the third one in a month. Are you sure Diaz isn’t manifesting them himself so he can catch a date?”