• Choose a sidekick *or someone other than the hero or heroine* that you would like to put in the spotlight that fits in the month's topic
• Share a picture (if you can) and information about the character
• Give the title and author of a book the character can be found in
• Please don't include too many spoilers when describing why the character is such a great sidekick
• The day of your post, click the 'Sidekicks' link in my header and enter the link for your post. Here, you can also see anyone else that posted during the month to visit their Sidekick Showcase's as well. 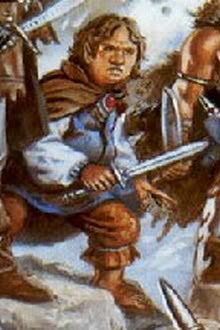 My choice is The Halfling Regis aka Rumblebelly
from The Icewind Dale Trilogy, The Legacy of the Drow Series, The Paths of Darkness Series, The Hunter's Blakes Trilogy by R.A. Salvatore

(He is in others but this is as far as I have read so far.)

At first you get to know Regis for carving scrimshaw out of the bones of knucklehead trout, and looking for the most prosperous life possible while doing the least amount of work.

As you get to know him better you see he is also notorious for using his ruby pendant to manipulate the thoughts of others. He likes to get them to see things "his way", which has gotten him into trouble as often as it has gotten him out of it.

The trouble normally comes when the power of the ruby is broken. He felt that unlike the other Companions of the Hall, he was not a hero, and relied on them heavily. You might say he took advantage of them keep his hide in one piece. Though after being kidnapped and tortured he starts to come into his own. At one point while Bruenor Battlehammer is on his deathbed, Regis becomes the steward of Mithril Hall, and eventually finds a way to save Bruenor's life.

"Really, you should ask before you steal me away! This perfectly marvelous cat had caught me the juiciest meal!"

"I like my belly and intend to keep it, thank you. I may even add some more to it!"

"I decided that I could not let Bruenor run off into trouble without me being there to pull him out."

Follow my blog with Bloglovin
Posted by JezzebellJC at 12:00 AM