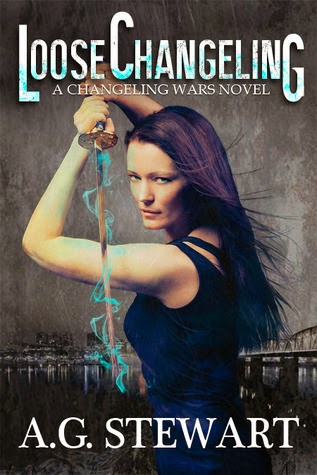 When Nicole catches her husband in bed with another woman, she doesn’t just eject him from the premises--she turns his mistress into a mouse.

It’s not as if she meant to. Far as she knew, she was regular-issue human. So she’s mystified (and mortified) when Kailen, Fae-for-hire, shows up on her doorstep the next day, hits on her, and then drops this bomb: she’s a Changeling, a Fae raised among mortals. The doorways between the Fae and mortal worlds have been sealed shut for a millennium, but now are opening randomly at an alarming rate, and mortals are turning up dead. Kailen’s employers believe she’s the only one who can close them.

Nicole would be happy to oblige and get her life back to normal, but she’s developed a magical block. Not only does she fail to turn her husband’s mistress back into a human, she can’t do any magic unless she’s angry--and she’s only angry enough when her husband’s in the room. Before Nicole can say “I don’t believe in fairies,” she’s jumping between the Fae and mortal worlds with her soon-to-be-ex, his mousy mistress, and the Fae bodyguard she’s increasingly attracted to, trying to figure out who’s opening the doorways and why.

And she’d better stay mad and learn how to use her powers quickly, because there’s a price on her head. Any magic a Changeling performs cannot be undone by another Fae, so the Fae have a simple rule for those like Nicole--kill on sight.

Ever have your life turn upside down in the span of a few days? And not upside down in the just-had-a-baby or just-bought-a-house or even the my-brother-joined-the-circus-and-just-got-arrested-for-being-a-little-too-close-to-the-zebras sort of way.

I mean the sort of way where you find out you're not actually human.

I loved that Nicole Philbin our protagonist is a married 32 year old with a regular crummy job just putting up with daily life. Some of the powers she develops in during the story really had a unique feel to them. Kailen is my type of supporting male character. He kind of has an attitude that his way is the only way until you prove to him another way works. Also the story made sense from a plot point of view.


Owen, Nicole's husband, only seemed like a douche to me throughout the book. I guess him cheating on her in their bed as you first meet him coupled with his weak ass reasons why just made me want to punch the creep. To me, Nicole's biggest weakness was letting him hang around and not sending him off right away.


Romance love triangle front and center. She's thinking of divorcing Owen but that doesn't mean she can take up with Kailen, right? Besides she may take the cheater back.


Overall, Loose Changeling held my interest and I'm interested in getting my hands on book 2. I really enjoyed the variety of powers shown and some of the interesting fae. How the Fae worlds are set up also caught my attention. The banter between Nicole and Kailen also helps the story along when the actions starts to slow. But don't worry there is plenty of action and a villain that not even their own child could love. Well for long any way.

"Okay, okay," Kailen said, hands held up in a gesture of surrender, "but don't blame me if you don't believe me. Those were hobgoblins. Nasty critters. Very grabby, as you noticed. They get a hold of you with any two of those arms, they'll tear you into pieces. They may look foggy, but cut them in any of their vitals, and they dissolve."

"I'm a mercenary. A Fae mercenary."
I blinked. Not exactly what I'd expected. "What? You're gay?" That -- well, it wouldn't explain anything. Nothing at all.
He glared at me. "Fae. I'm a Fae mercenary. I specialize in protection -- people, objects, animals -- you name it.

Again, Kailens gaze slid from mine. "It's actually a lot like cooking."
"I'm a terrible cook. I burn things. A lot."
He laughed, a tight, nervous sound to it. "It's just a metaphor. There are recipes, but the best cooks know how to improvise. You get an idea, you form it and focus it, and then you pack it with an emotional punch. Bam! You've done some magic."