Review: Cross My Heart, Hope To Die (The Lying Game #5) by Sara Shepard

This is the 5th book in this series.  I try very hard not to put any major plot spoilers in any of my reviews.  However, this review may have a few minor spoilers for previous books. 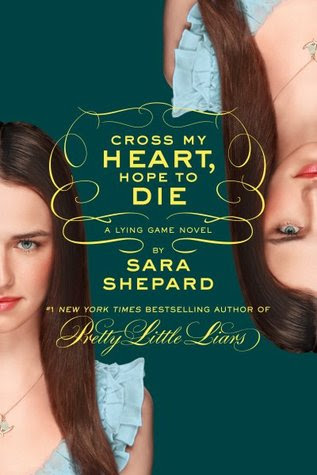 When I died two months ago, my killer told my twin sister to become me—or else. Now Emma has it down to a T. She tosses her hair with the signature Sutton Mercer flip and can lead a Lying Game prank with the best of them. She’s even repairing my relationship with my adoptive family. The only thing she hasn’t done is solve my murder.

Then our birth mother, the woman who abandoned us, showed up in Tucson. Emma hasn’t seen Becky in twelve years, but Becky recognizes Emma immediately—as Emma. Is it a mother’s intuition . . . or does Becky know I’m already gone?

“At least she had a clear picture of what the Lying Game was now: Girl Scouts for psychopaths.”

Ok, so everyone knows I am in love with Pretty Little Liars.  When Sara Shepard started a new series called The Lying Game it made my heart dance. This series is about a young foster girl named Emma.  She has been moved from foster home to foster home the majority of her life.  She often wondered what it would be like to have a real family.  Well lo and behold, she comes across this strange video online of a girl who looks exactly like her.  She gets all Nev from Catfish and figures out this girl is actually her twin sister, Sutton.  Long story short, she goes to meet this twin sister and finds out she has been murdered.  She now pretends to be Sutton to try to figure out who killed her.  The twist is the story is told from Sutton's ghost's point of view.

“Always sleep with one eye open. Never take anything for granted. Your best friends might just be your enemies.”

The first book was simply amazing start to end.  The second book was a slow start but quickly gained momentum.  The third was good but not great.  The fourth book did not impress me at all.   Now skip ahead to book 5 Cross my Heart, Hope to Die.  In this book, the twin's birth mother comes back.  She is very mentally disturbed, but her reappearance leads to more questions than answers.  Even in all her hysteria, she calls Emma by name.  Could it be even after over a decade of not seeing her daughter, her bond is so strong she knows which daughter is which?  Or could she be the one responsible for Sutton's death?  There is also a new girl in town, who seems to see things that others can't.  She noticed right off the bat that Emma and Sutton's aura were totally different.  With her snooping around, could she blow Emma's cover as Sutton?

I really enjoyed this book.  After the disappointing last book, I was skeptical on this one.  However the author did a much better job on keeping the story moving to me on this one.  The mystery of who is behind it and everyone looking so suspicious is such a delight for me to read.   The 6th book comes out next week and I am excited to know what will happen next!!!

Brings Joy to my Life:

I love the story telling from Sutton's point of view.   The neat thing is since becoming a ghost, she somehow is attached and follows her twin around.  But she can only see what Emma sees.  So if Emma closes her eyes, Sutton sees darkness.  In life, Sutton was the head mean girl.  Emma is the nice, smart, goal oriented one.  So to see this contrast by Emma trying to step into Sutton's life unnoticed makes for good entertainment.  Even in death, Sutton is jealous and still holds some of her old mean ways of thinking.  However, seeing things thru Emma also makes Sutton rethink some things she did in life.  I LOVE the air of mystery. There are so many clues as to who it could be.  So many that it really could be anyone.  They have ruled out a few in previous books before.   But there is still no clear answer as to is behind the murder.  And who would even know enough to know they were twins.   Much like the Pretty Little Liars series, you read the whole book and you learn stuff, but in the end you still know nothing.  It is what makes the books great and hurts my feelings all at the same time.  I am sure when the killer is revealed I will be surprised just like I was in the PLL series.

Two months have passed since Emma has taken over Sutton's life.   She struggled a lot at first trying to figure stuff out, but she is getting a better grasp of who Sutton was and how she handled things.  However, she still does a lot of stuff in true Emma fashion.  That in itself is not my problem.  My issue is why no one really questions why in the world there is such a big change in Sutton's personality.  Not really a major issue, I guess if people questioned it too much, the book/story wouldn't work.  But she used to struggle for c's, and now she is a straight a student.  Things like that for some reason bother me - why people wouldn't question more than they do.  Don't get me wrong, people have noticed, but they just breeze past it.  There are small things of that nature in the story that kind of make me be like, "really"?

"But you can't make someone be something they're not."

Along with PLL, this is my 2nd guilty pleasure.  This series is a fun, easy series to read.   It has tons of mystery, lovable characters, family drama (who does't love family drama and deep buried family secrets), high school drama (awww the good ol' days), a little bit of love (but not too much thank goodness), a few nerve wracking moments, and a little comedy thrown in.  I am glad Sara brought back the goods in book 5.   I pre-ordered book 6: Seven Minutes in Heaven a while back.  Can't wait to see what happens next!!!!!

“Sometimes you have to admit that a relationship can't be fixed. That no matter how much you want to, you can't trust some people.”