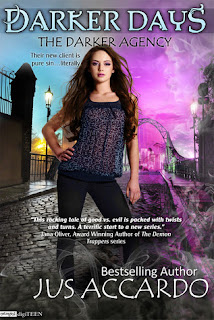 Jessie Darker goes to high school during the day, but at night she helps with the family investigation business. Cheating husbands and stolen inheritances? They’re your girls—but their specialty is a bit darker. Zombie in your garage? Pesky Poltergeist living in your pool? They’ll have the problem solved in a magical minute. For a nominal fee, of course...

When gorgeous new client, Lukas Scott, saunters into the office requesting their help to find a stolen box, it sounds like a simple case—until the truth comes out. The box is full of Sin.

Seven deadly ones, in fact.

They’ve got five days to recapture the Sins before they're recalled by the box, taking seven hijacked human bodies with them. Easy peasy—except for one thing...

There’s a spell that will allow the Sins to remain free, causing chaos forever. When the key ingredient threatens the life of someone she knows, Jessie must make the ultimate choice between love and family—or lose everything.

I read the first chapter and had to know more right away! What I thought was going to be a cute supernatural-filled read turned into a high-powered, tilt-a-whirl sundae with OH MY toppings.

It was even better than the first chapter had me so excited for. I met a girl that's strong and stubborn working for an investigation agency with her mom. One fabulous thing about this story that I don't see often is that her mom is a large part of her life. She tries to set Jessie on the bench during the hard cases to keep her safe, but Jessie's too stubborn for that. I love seeing this caring mother though. Jessie's father plays the role of absent parent, and his story, even how it's revealed in bits, is incredibly interesting.

Lukas is by far my favorite character besides Jessie. He is the storm that rolls in and blows their town to smithereens. Handsome, charming, a bit naive, and great back-up, he brings the problem to their doorstep, but stays through thick and thin to get the mess cleared up.

The story and the writing are absolutely spectacular! I didn't want to put this one down for a minute. The whole concept of the Seven Deadly Sins being personified and snatching bodies was unique and exhilarating, then Jessie and her mom having such a small deadline to be up against to save the innocents kept the pace action-packed. There are epic twists, turns, and reveals within the pages of Darker Days.

None - yep that's right. I don't remember one negative thing with this book. Even the cover is pretty!

The romance is very YA and cute to read. Jessie and Lukas make an adorable pair. Lukas is amazingly good, handsome, and old-fashioned. Jessie needs an old-fashioned guy. She's a little rough around the edges and he helps smooth them out. I like seeing the two of them together.

There is an attempted rape to watch out for.

Wow! Talk about an ending! How could you do that to me Accardo? Smack me with the feels and make me get all invested and emotional? What a roller-coaster ride and cliff jump at the same time, but in a good way! This story should thrill any paranormal and urban fantasy fan. Jessie may be a YA character, but there is not a lot of the YA annoyances that may turn adult readers off. Darker Days has some great supernaturals, action galore, topsy-turvy twists, and a story-line that I must see continued in a second installment! Absolutely recommended.

"The woman could sleep through an alien invasion complete with marching band to announce their presence. Me? A fly farted downtown and I was up."

"Child Welfare would not be happy to hear you tried to feed your only child to a walking corpse."
Posted by JezzebellJC at 12:00 AM