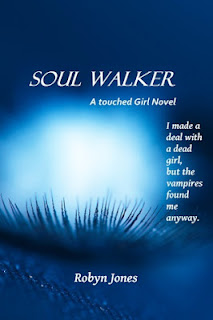 We are celebrating Soul Walker's free days on Amazon with a Blog Hop + Giveaway. Please read below for the Giveaway because there can be a total of 5 winners and the prizes are different amounts of Amazon Gift Cards - up to $30 on one.

I am so thankful to have Peter with me today! He's going to answer a few questions for us. He's usually a pretty private person so this is definitely a treat.

JC: Anna is silent for a very long time, how have you have gotten to know her without her voice?

Peter: I used to determine exactly what kind of day she was having based on her smile. She had so many incremental variations. My two favorites were her happy beyond belief smile and her cranky, but don't want to hurt her parents' feelings smile. She did this thing with one corner of her mouth that said so many things. “Stop dancing in front of my favorite TV show.” or “I wasn't ready to come out of the water.”

JC: Very true, a lot can be said in a person's smile. How about this, if you could spend an entire day doing anything you wanted, what would it be?

Peter: Anna asked me to answer your questions honestly since I've been on her case about sharing with me. Can you believe she used those words 'on her case'? I'd be on one of Anna's adventures with Anna. She's never been sky diving. Her mom vetoed that idea. We'd catch something to eat on the drive back. No vamp speed or vamp powers. Just human Peter and human Anna. Later, with dusted up hair and skin, we'd . . . I don't think honesty stretches that far.

JC: You're right...that might dive a little into the TMI category.  However, Anna is not modest in the slightest, how do you feel about this trait of hers?

Peter: I feel like a man about it. I want to bite anyone looking at her the way I'm looking at her. Well, the biting part sounds more like a vampire response. I would beat the shit out of them.

JC: Whoa now...one word I would use to describe you is protective. How would you describe yourself?

JC: That's something to be proud of - what is the thing that you are most proud of?

Peter: When my parents died in my human lifetime, I took care of my sister like she was my own child. I think I gave her a really great life in those few years I got to have with her. Whew, I don't know. Let's start over. I only talk about my sister with Anna. No. Never mind, the answer stands.

JC: OK, we'll keep it. If you could change anything, what would it be?

Peter: We repeat our mistakes, all of us, humans, vamps, creatures I'm not at liberty to discuss. I guess it's important we ask this question, but for the life of me I can't untangle the thoughts of what I'd lose if I changed a single thing about my past. Would Anna ask for her parents back? She'd tell you not to risk such dangerous wishes.

JC: You mention a lot of types of creatures out there...where are all the places that you have lived?

Peter: Believe it or not, I don't remember every single place I've lived. Lilian took us to Greece. Lance insisted we travel the French countryside. We all thought it would be cool to hitchhike from New York to San Francisco. It was a game to see who came across the most bad guys. Jared beat out Lance by two. I kissed him for it.

JC: Wow I don't even know what to say to that. Let's move on to something more mundane...what type of shoes do you wear

Peter: Comfortable ones. When Anna lived on Guam I could get away with wearing zorries...oh, sorry, slippers. Jared and I go to the mall now and then to keep Lance off our backs. I found these low sneakers I really like.

JC: Sounds like the Converses I love so much. Let's finish with - what words or phrases do you most overuse?

Peter: 'Come on, Jared. I'm right here.' Have you noticed how he flirts with Anna?

I have indeed. Peter thank you so much for coming to answer some questions with me today. I really enjoyed diving into your psyche further :)

You can get Soul Walker for FREE on Amazon from February 18th - February 22nd. Also, Prime members can borrow for free anytime.

I'm the mom of two hardcore boys. My oldest trained me to be matter-of-fact, no frills. My youngest wants the whole singsongy sweet package. Thank goodness for reading and writing because they are my sanity makers. I know life is all about the journey, that's why I like my fiction to be all about the destination. I want to be taken somewhere not here when I read, same goes with the stories I create. Thrills, chills, tears, and laughter, but there has to be something to hold on to at the end.

Check out the previous posts for the week: Author Interview at Forget the Housework, I'm Reading, Excerpt of Soul Walker at Busy Moms Books, Excerpt of Soul Bender at PRUF Reads...and don't miss the special edition of Sidekick Saturday this week which will be posted early and Robgirlbooks will be highlighting a character from Soul Walker.
Posted by JezzebellJC at 12:00 AM