Publisher: February 26, 2013 Harlequin Teen
Genre: Paranormal, Fantasy
Format: Kindle
Source: Netgalley ARC *Thank you to Netgalley and Harlequin Teen for sending this to me for an honest review* 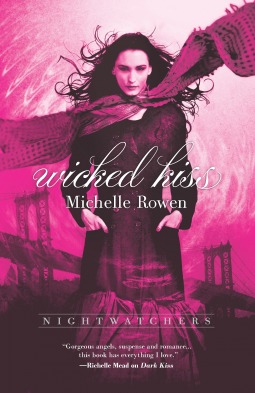 Goodreads Summary
MY KISS CAN KILL.

I used to be ordinary Samantha Day, but that's changed. Now, after one dark kiss from a dangerous boy, I can steal someone's soul...or their life. If I give in to the constant hunger inside me, I hurt anyone I kiss. If I don't...I hurt myself.

Bishop is the one whose kiss I crave most, but if I kiss him, I'll kill him. Then there's another boy, one I can't hurt. One whose kiss seems to miraculously quell my hunger. They're both part of a team of angels and demons that's joined forces in my city to fight a mysterious rising darkness, an evil that threatens everyone I know and love. I just wonder if I'll be able to help Bishop-or if I'm just another part of the darkness he's sworn to destroy....

When angels and demons must work together, something beyond evil is rising...

The Second in this Series, Better than the First

We all know that a lot of books fall into the '2nd book syndrome' and end up being my least favorite in the series. The love interests usually leave for 'noble' reasons and there is a lot of whining, heart break, and I'm left feeling like I should have skipped the book entirely. Not so with this one thankfully...it even surpassed how I felt about the first one.

The very first thing that I liked about this one is that Samantha stepped up and I became more attached to her as a reader. One of the things I disliked about Dark Kiss was that Sam seemed bratty and was constantly saying one thing but acting another way. She admits in this one that she was selfish for her past actions that were described in the first book and that she learned from her mistakes which is why she now worries over her mother. In this one, she is far more giving and self-sacrificing which is needed in a heroine.

Also, she helps her frenemy from the first book, Jordan, which definitely shows a strength of character and that's what I like to see. I enjoy it when we get to delve deeper into why someone isn't a joy to be around. I felt like I got closer to both Sam and Jordan, and that is an important part in making the characters well-rounded.

More on the character's growth was that I got to see flashbacks of Bishop's and Kraven's past. Even though as a reader I could see and infer most of the causes behind their rocky sibling relationship, it was a pleasure to learn the exact causes and see Samantha learn them as well. The introduction of Cassandra was also well-placed. Even though I thought she was just meant to me a love triangle distraction for Bishop since she appears to be a perfect match for him, I thoroughly enjoyed her part to play in this one.

Then there is the story! OK so I have read a ton of paranormal and fantasy books, but this one is different and chilling if you actually take the time to stop and think about what is going on in Samantha's world. I don't want to give too much away, but any time you are playing around with souls and the fact of angels and demons being on Earth, I get a little creeped out. The action is more intense and the stakes are a lot higher. I love how Rowan utilized foreshadowing so well that because I was paying attention in the first one, I did have an idea of where this one was going.


Remember when I said that this one didn't have a lot of the qualities of books that fall into the '2nd book syndrome' trap? Well, this one does do the whole leaving for noble reasons thing. However, there was no whining, heart break, and it all made complete sense to me why it occurred.

Sometimes while reading, I would jump from one thing to another so quickly. It did end up flowing together smoothly, but the ride was a little bumpy at times.

The fact is that Bishop and Sam cannot stay away from each other. Is it due to supernatural forces that are at work and not a natural attraction? This book answers that question. I must say that their romance seemed pretty doomed to me and I applaud the fact that they don't simply give up.

I was impressed with the way the story went in Wicked Kiss and that Rowan doesn't mind getting her hands dirty. I was overjoyed to become more attached to the characters and watch them down a road that seemed chilling and hopeless at times. Definitely recommended for paranormal fans.

"Someone just got killed! Don't you care?" He flicked a glance toward the body as he began to ascend the stairs behind me. "And how would my caring make any difference? Still happened. Dude's still dead."

"No, it's not. We'll keep looking. You, however -" Bishop raised his gaze to mine again "- are going home where it's safe.
"Safe?" I sputtered. "You want me to go home where it's safe." My frustration was mirrored on his face.
"Did I stutter?"
"Uh-oh," Kraven muttered. "Trouble in paradise."

He drew closer to me. Too close. I pressed my hands against his firm chest and he froze, looking down at where i touched him. But then I surprised him by shoving him backward. "Honestly. Just stay back, would you? Are you trying to make this more difficult?"

"The way you're looking at me right now makes me think it does matter. A lot."
"How am I looking at you?"
"Like you despise me."
"Am I?" I didn't despise Bishop, just the opposite. My feelings toward him were very confusing, true, but I didn't hate him. I didn't think I could ever hate him.

"You wanted to learn more about my past, Samantha. I guess you should be careful what you wish for."

Posted by JezzebellJC at 3:51 PM