Review: Surrender (The Ferryman and the Flame) by Rhiannon Paille 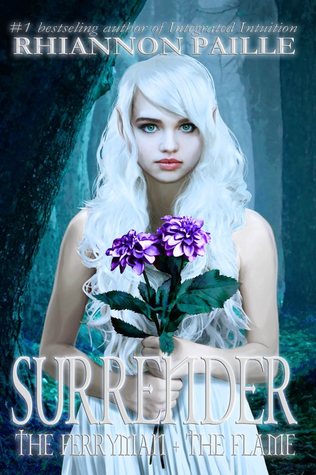 Publisher: October 2, 2012 CreateSpace
Genre: Fantasy, Paranormal, YA
Format: Kindle
Source: Netgalley - Thank you to Netgalley and Coscom Entertainment for sending this to me for an honest review


Goodreads Summary
How far would you go to save everything you ever loved?

Kaliel was warned about her love for the Ferryman. One day he will marry the land and leave Avristar forever. She doesn't listen, and because of what she is-- a Flame-- one of nine apocalyptic weapons, she sparks a war. In a desperate attempt to save her home and her love, Kaliel tries to awaken Avred, not knowing she may have to make the ultimate sacrifice.

An Enchanting World and Romance with an Explosive Conflict


When I saw that cover, there was no way that I would pass this one up.


First I would like to start with saying that I just had a conversation with a fellow blogger about how we would like to see more elves in books. I happen to be an elf fan, and this book fulfilled that need for me. Not only are there elves, but there are feorns (wolf-men creatures), merfolk, fae, shee, draconians, and many more. It is filled with creatures that I do not read about on an everyday basis, and some that I certainly have never heard of before.

The possibilities! This world is so beautiful and enchanting. The descriptions Paille gave of the waterfall, the lake, The Great Oak, and more in the book were so easy to imagine. I felt like I could see Kaliel standing beside me because she was detailed so well. The types of creatures and the problems that face them are something that will take this story far past Surrender and into a series that has to be explored.

I adore the paths that Kaliel and Krishani end up on. Their identities unravel and are revealed as well as their powers throughout the book. The conflict is nail-biting and the ending is a little hard. There was an alternate ending included in mine.


The story was slow at times, and the climax did come late. Because this world is so elaborate, it can be hard to follow at times. There is a lot going on and if I was not paying very close attention, I missed something and had to go back and read over.

Also, I couldn't really keep up with the time in the story. It often said how many "moons" passed or "summers" ago, and logically I know that this means months and years but in my head as I was reading, I didn't follow along. I would love to see a timeline of all the events that occurred in the book.


The romance is a really big part to Surrender in my opinion. Usually I am very opposed to 'insta-love', and this book does have it. Kaliel and Krishani start the book off with a bang as it showcases their first encounter. There are sparks flying everywhere. Then I follow time spent with Kaliel and Krishani separately as they are living their lives and basically pining away for the other person. Normally, I really feel like this would annoy me, but in this book, Paille led me to believe that there is more to the story and these two are just supposed to be together. I don't think these characters really have a choice but to have these feelings for one another. They were supposed to "marry the land" and elves in this world do not fall in love with others, but these two are an exception (they are also exceptional) and I must make allowances.


Even though Surrender is considered a YA book, the romance gets pretty hot and heavy later on and I would really categorize it as New Adult.


I know that this one will likely be a hit or miss among the fans. I loved the intricate world, the romance, and I can see the many possibilities of where this book can take me in a series. I recommend this for people who enjoy Fantasy and do not mind insta-love as long as you can tell it is for a reason.

A Ferryman perched on a throne, wearing the royal colors of black and gold, across from him, a Flame. They stared at each other with a look that meant one thing - soul mates.

"Wait!" He stopped, his expression mangled. "Will I ever see you again?" she asked. "Probably not."

Something tortured and dark that made him different than the others, more compassionate, less arrogant, and a lot more observant.

"Do you feel different?" I feel more awkward, she thought. "A little, I suppose."

"I made a bolt of lightning strike down a three-thousand-year-old-tree in Amersil, because in the middle of a meditation I thought about your green eyes." A sheepish smile crept onto his face. Her eyes widened.