Review: Through the Zombie Glass (The White Rabbit Chronicles #2) by Gena Showalter 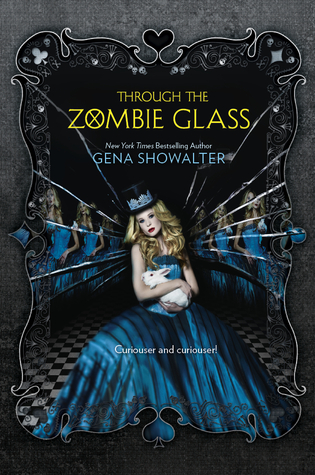 Zombies stalk the night. Forget blood and brains. These monsters hunger for human souls. Sadly, they've got mine...
Alice Bell has lost so much. Family. Friends. A home. She thought she had nothing else to give. She was wrong.
After a new zombie attack, strange things begin to happen to her. Mirrors come to life, and the whispers of the dead assault her ears. But the worst? A terrible darkness blooms inside her, urging her to do very wicked things.
She's never needed her team of zombie slayers more, but ultra bad-boy Cole Holland, the leader and her boyfriend, suddenly withdraws from her...from everyone. Now, with her best friend Kat at her side, Ali must kill the zombies, uncover Cole's secret and learn to fight the darkness.
But the clock is ticking...and if she fails at a single task, they're all doomed.

“Fear of spiders is arachnophobia, and fear of tight spaces is claustrophobia, but fear of Ali Bell is just called logic.”


I absolutely loved Alice in Zombieland so I had to read this one. I actually read Through the Zombie Glass immediately after reading the first one and realized I somehow didn’t write a review up for it so before moving on to The Queen of Zombie Hearts, I gave this one a re-read.


Throughout the entire book, Ali is faced with complex problem after harrowing issue after heartbreak after doom and gloom. I loved every minute of it! There was so much happening, and it was all bad news for our heroine. Alice in Zombieland ended with her getting horribly injured, so she starts Through the Zombie Glass in a hospital bed with stitches. Things only grow worse for her from there. I really liked the direction the story went. It was definitely a unique spin.

A few new characters were introduced to stir up drama, but I enjoyed Gavin’s personality quite a bit. He’s just so unabashedly honest. Mackenzie and Trina became a couple of my favorite characters in this one and I couldn’t stand Mackenzie at all in the first book so I loved that character development. Kat, the Sass-Master, I continue to adore as well as Nana, Ali's adorable grandmother. I also enjoy that Emma keeps making appearances as a Witness.

There is a lot of action, a lot of inner struggle, and a lot of guessing what will happen. There were times that I looked down to see how far into the book I was because surely I was at the climax of the story, only to realize I still had quite a bit more to go.

Cole. Oh Cole. He exacerbated me quite a bit throughout this story with his hot-and-cold, incredibly mixed messages, and really bad decision making.

An Ex Here, an Ex There

It’s the whole 2nd book, introduce-the-relationship-drama thing going on in Through the Zombie Glass. There are literally exes everywhere. Veronica is brought in from Georgia who happens to be Cole’s ex. Mackenzie is still around who is also Cole’s ex as well as a lot of break ups and make ups going on throughout. The romance in this one is all over the map.

I’m still loving this series. Through the Zombie Glass was a wild and fun ride through hardship after hardship. I really felt for Ali, but she kept going and giving her best no matter what. The characters are fantastic, and their dialogue is fun to read. There is tons of action and interesting concepts introduced. Absolutely recommended.

I felt my hand curl into a fist. Felt my elbow draw back. Felt my arm dart forward, my knuckles crack into Cole's jaw. I couldn't stop myself. His head whipped to the side, and blood leaked from a cut in his lip. Behind me, gasps of shock abounded.

“Enjoy him while it lasts," I called. "Apparently he has Girlfriend ADD."

“Those we love, we can grow to hate. And life...life can be perfect one minute and in shambles the next.”

“You're making me rethink my stance against cold-blooded homicide.”
Posted by JezzebellJC at 12:00 AM